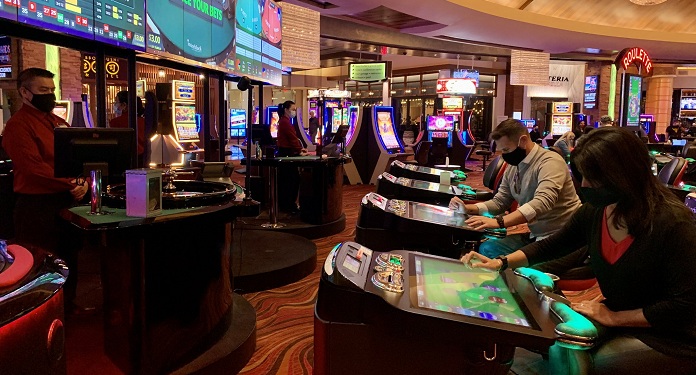 The Las Vegas Convention and Visitors Authority (LVCVA) recently reported that the city had about half the number of visitors in October than in the same month last year, but 9% more than in September this year.

The government official recorded steady declines in tourism indicators, reaching the eighth consecutive month of sector shrinkage. However, the percentages have been gradually improving, with reductions in visits of 97% in April and 49.4% in October.

Experts are still speculating what the November numbers will look like now that Governor Steve Sisolak has set a maximum allowed capacity of 25% at resorts, which was previously 50%.

December also doesn’t look encouraging after the biggest event of the year – the 10-day National Finals Rodeo – was moved to Arlington, Texas, for 2020. Sponsors say the rodeo will return in 2021.

“With the continued reopening of hotels in late September and early October, the room count for establishments opened in October was 140,658 rooms,” said Kevin Bagger, director of research at LVCVA.

An analyst at the gambling industry at JP Morgan in New York said the lack of conventions and reduced flow in the air network continue to affect the Las Vegas market.

Joe Greff, in a message to investors, said the land tourism market improved in October. “Average daily road traffic in October increased by 3.6% on all major highways and 7.3% on Interstate 15 on the Nevada-California border.”

Greff also stressed that “on the other hand, the total number of air passengers remained low, with a reduction of 59%, standing at 1.98 million passengers”.

Tourist flow in the “gambling city”

Visitor volume in the first 10 months of 2020 – like all other categories – has dropped dramatically compared to 2019.

Participation in the conventions decreased by 69.6%, with 1.7 million viewers in January, February and March. In 2019, the total for the 10-month period was 5.7 million, pointing to a record total of 6.6 million in the year.

The number of tourists rose slightly in October, with a percentage improvement of 0.5% compared to September, reaching 110.9 thousand. Although compared to October 2019, the flow of visitors fell 24.9%.