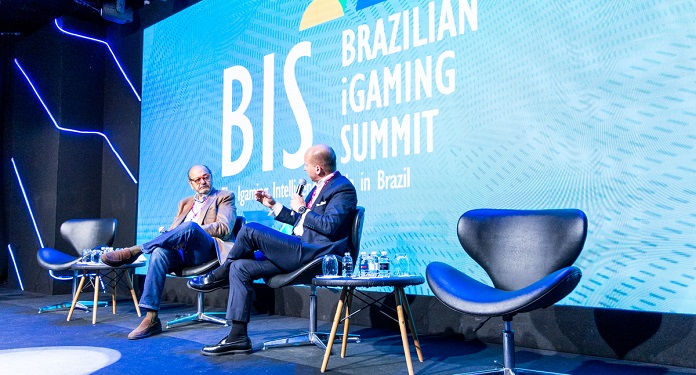 The Brazilian iGaming Summit (BiS 2022) – The iGaming Intelligence Made in Brazil came to an end on the night of this Wednesday, 29th. The second edition of the biggest betting event in Brazil closed another cycle of content, networking and information of vital importance for the entire iGaming industry worldwide.

Since Tuesday, the 28th, the BiS 2022 program has taken place at Espaço Boulevard JK, in São Paulo. With a structure designed for the success and experience of the public, the event provided intense networking between operators, regulators, politicians, authorities, ambassadors and entrepreneurs in the sector.

The lecture was presented by Laura Porto (Marketing Manager at Vbet) who raised important questions about good practices in the gaming and betting sector. The executive narrated the company’s expansion process in Latin America.

“We have a full product from Betconstruct and content integration with Pinnacle. This is a big advantage for us as we have two options on one platform. And we have franchises for offline, with the entire operation being supported by VBET.”

Laura also revealed that the group is focused on Brazil and plans to grow even more in the country. “Our brand serves many cultures and we have physical offices all over the world. With the regulatory issue, we would love to grow in Brazil. This is a very important market for VBET.”

In addition, the marketing manager listed the best practices adopted by the brand on the national scene: localizing and adapting the product and language well to the culture and target market.

The panel featured Paulo Saad (President of Grupo Bandeirantes de Comunicação) and Roberto Regianini (Chief Commercial Officer at FBM). For Saad, the segment must have its moment in the country. “The market is there, we are seeing how much it moves in employment, taxes. Many international companies are afraid to enter the national market, since we are in a ‘gray’ moment”.

He recalled the eight decades of banning casinos in Brazil. “Casinos in Brazil, 80 years of prohibition, and the Chamber last year, in a burst of courage, managed to approve the PL for the release of games in Brazil”, adding: “the officials of the Ministry of Economy strive to make a safe regulation for the games”.

The president of Grupo Bandeirantes pointed out that the games already take place in Brazil and several studies show that where the games were legalized there was an exponential increase and appeal for gambling within the law.

Roberto Regianini, on the other hand, said that “the first point is to know if this Regulatory Framework will bring legal stability for the company to invest in the sector.

According to Regianini, the perspective is that the industry can employ up to 500 thousand people directly. “It is important to understand and put Brazil at the forefront. Bringing Brazil to the gaming industry in a healthy and safe way”, noting that the regulator has a very important role to play in providing a healthy environment for the gambling market.

Game providers and operators need to walk together in this moment of the rise of betting around the world, and this panel proposed some solutions and best practices for the success of companies in the iGaming sector. “In recent years we have had a great growth of online casino and other forms of games from which the Brazilian market is based”, argued Pedro Lucas.

Isaac Mizrahi mentioned what Soft2bet has to offer for the regionalization of games in Brazil. “The first difficulty and curiosity I found at the beginning were sites that only translated the platform, instead of localizing all the content. Brazil is a giant place of continental scope and each region must receive a platform respecting its culture and peculiarity”.

In addition, Mizrahi noted that responsible gaming should be encouraged. “We as solution providers, we have to take responsibility to our users. With the new generation looking at this market, we have to bring this topic (responsibility)”.

Ramiro Atucha considered that it is essential to consider the differences in each region. “And the same is true for each platform, which must be created respecting each location.”

According to Jesus Rafael Campos, Brazil is a true continent and is about to enter a regulated scenario. “In the region, all countries have taken the path of regulation, taxation and the benefits this is bringing are significant. The world is going through a deep crisis and the states are opting for the regulation of this industry, which must generate security for all involved”.

The CEO at BetConnnections believes that Brazil can become a world reference. “Brazil presents a unique environment for the entire industry. We know that it is a huge territory and is segmented by some regions that have very well-defined preferences. We identified that the Brazilian market has three or four well-defined territorial trends”.

LECTURE – The importance of Responsible Gaming in the post-regulation period

The lecture was presented by Fabiano Jantalia (Lawyer at Jantalia Advogados) and Vinicius Tsuda (Account Manager at Combating Fraud). The two provided a great moment of debate about responsible gaming in a post-regulation period.

Fabiano Jantalia narrated his trajectory and involvement with the gaming market. “I had the opportunity to work on PL 442, which is now in the Senate. My objective here is not to review responsible gambling and its aspects, as we in the industry already know what that is.”

“Brazilians gamble already.. The regulation will, at most, expand the game options that we already have today”, continued Jantalia.

The survey presented some questions related to betting practices, games played, game frequency, betting profile, etc. In addition, the research provided relevant data to understand why one should invest and consider responsible gambling as an essential factor for the integrity of betting.

According to the study, the opening and regulation of the market has the potential to increase the stimulation and safety of gambling (25%). While the Brazilian is especially in favor of legalizing sports betting (49.5%) and bingo (32.6%).

In his participation, Vinícius Tsuda introduced his company’s service: “Combat to Fraud is a technology company that fights infractions. We are a flexible brand and we have clients in the most diverse sectors. gaming in the Fight against Fraud in the registration and payment processes”.

According to Tsuda, companies are already looking for solutions to comply with the law and that these procedures provide security for both the company and customers, who trust that the company will treat their data in the best way. Our idea is to generate minimal friction with great safety and speed”.

Sponsorship by bookmakers to football teams is increasingly common in the world, including in Brazil, where most teams in Series A and B already have this type of partnership. The CEO of the Magnus Futsal team, Fellipe Drommond said that clubs need to understand the regulation because “today, the Bet market is present in every team in the Brazilian scenario”.

In terms of football, Jorge Avancini highlighted that the partnership with EstrelaBet was an excellent opportunity for Internacional to enter this segment. He also recalled that clubs nowadays, more than sports associations, are already being considered “entertainment companies”.

Mateus Lemos, in turn, evaluated the level of engagement that clubs offer to sponsors. “It is very important to understand in this area of ​​activations the reason for all this. Make fans and teams engage with the related betting brand. The approach of the fan with the brand to bring a historical context”, adding: “We as bookmakers, within the club platform, we need to show our differentials”

The moderator Matheus Antunes pointed out that a doubt that many have when looking for sponsors refers to performance. At this point, Rafael Zanette mentioned EstrelaBet’s first project outside of football.

“Magnus Futsal was the first project outside of football that we entered, precisely because I understand the difference in attitude in activation. The ideas matched a lot and we decided to do it differently”, he revealed. He also highlighted that the “great point of sports sponsorship is to reach intangible levels. And, we know that the result is very strong”.

Olavo Sales (Chairman of the Board at ABRABINCS) brought important insights into competition, ethics and the Associa model. “Brazil is the sixth country in population in the world. We are a point out of the curve, we have a large population and we don’t have regulated gambling”.

Sales advised the players to look for interesting partnerships because he believes that “the market will not welcome 200, 300 operators”. However, he predicts that the emerging market will come “with great vigor, but there will have to be a consolidation of space and work”.

LECTURE – The importance of Marketing and Affiliation for the gaming industry

The last BiS activity was promoted by Ricardo Magri (Commercial Director at Eightroom). First, Magri made a point of thanking the organization of BiS, Flávio Figueiredo, Alessandro Valente and their respective work teams.

For Magri, affiliate marketing is a combination of all aspects of digital marketing and “affiliation always has a connotation of performance”. Finally, the director stressed that it is always necessary to listen to the godson and align risk management together.

Alessandro Valente (president of Jericho Eventos, BiS 2022 organizer company) was given the mission to officially finalize the 2022 edition. Valente thanked everyone present and invited the creators to the stage to close the iGaming Brazilian Summit.