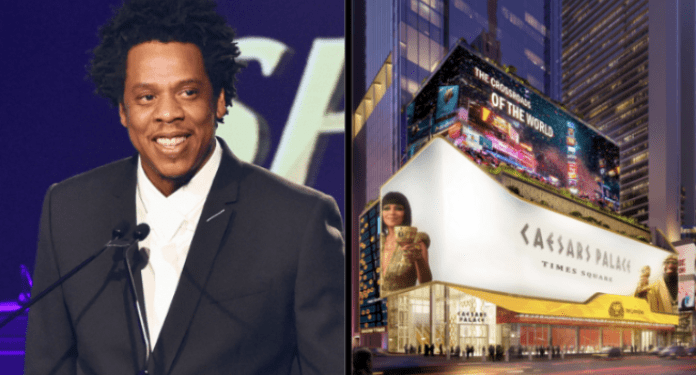 With the goal of opening a full-fledged casino in Times Square, New York, world-renowned rapper Jay-Z teamed up with a group of heavyweight investors. The name of the place would be Caesars Palace Times Square. Jay-Z teamed up with SL Green and Caesars Entertainment to plan the new deal. “New York is the epicenter of culture. We have the opportunity to create a destination in the heart of the world’s true crossroads,” it said in a statement.

“My partnership with SL Green and Caesars holds every promise and commitment to economic opportunity, growth and enrichment for the community and everyone who visits the Empire State,” added Jay-Z.

Should the deal go through, the rapper and team will oversee operations at 1515 Broadway, as well as six other SL Green properties in Times Square. The casino would span – in total – eight floors in the 54-story tower between 43rd and 44th West.

The space would have, in addition to a wide range of opportunities, restaurants and other entertainment models. The first floor, in particular, would be reserved for non-gambling uses.

The idea’s first ‘bump’ was that local theaters expressed some concern about the casino, citing that it would be “dangerous” for Broadway venues. Consulting firm AKRF, on the other hand, argues that casino visitors will boost Broadway sales by 400,000 annually.

In addition, an estimated $166 million in retail purchases for nearby businesses and an additional seven million restaurant meals taken away from the casino

A formal request for proposal (RFP) will be issued by New York in January considering casino applicants. After that, a selection jury will decide the location until the end of the year. Other interested parties include New York Mets owner Steve Cohen, Wynn Resorts and Soloviev Building Company.