Início Casino Hard Rock reveals plans to close and renovate ‘The Mirage’ with a... 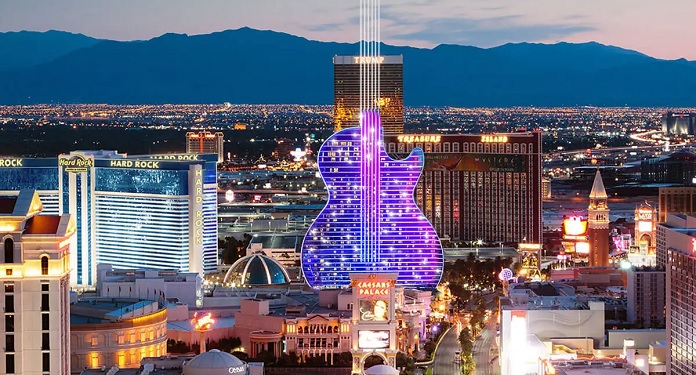 Hard Rock International plans to close The Mirage, destroy the entire hotel and casino, and spend billions to expand and upgrade the property starting in late 2023 or 2024, the company has revealed.

Hard Rock, owned by the Seminole Indian tribe, took a big step by acquiring The Mirage on Wednesday as the Nevada Gaming Board of Control recommended approval of its $1.08 billion purchase from MGM Resorts. International.

If the sale is approved by the Nevada Gaming Commission on Dec. 22, Hard Rock CEO and President James Allen said that when the resort expands, it will grow from the 3,044 rooms The Mirage has to 3,640 rooms under the Hard brand. Rock.

Hard Rock will also replace an iconic feature on The Mirage – the volcano – with a guitar-shaped tower. Allen said he wanted to make the guitar tower even taller, to nearly 1,000 feet, but those plans were rejected by Clark County.

“Certainly the volcano is legendary, but as you saw in the renderings, the guitar-shaped hotel replaces the volcano,” he said during the hearing. Allen did not mention the timing of the erupting volcano’s fate, which was conceived by former Las Vegas gaming executive Steve Wynn.

The expanded and updated resort is expected to reopen in 2025 or 2026. Allen stated that current employees will be asked to keep their jobs when ownership is transferred to the Hard Rock property, adding that due to the expansion, more workers should also be hired.

BetMGM will continue to operate the property’s sports and racing betting. Allen also claimed that Hard Rock had signed an agreement to keep Cirque du Soleil’s Beatles-themed “Love” show on the property.

Allen reiterated that animals at Siegfried & Roy’s Secret Garden and Dolphin Habitat and enclosures within the resort that housed dolphins, tigers and jaguars would be permanently relocated. Attractions are now closed.

Allen further told the Review-Journal that he was thrilled with the Board of Control’s action. “It certainly is a big day for the Hard Rock entity, and we look forward to taking the next step with the Nevada Gaming Commission,” he said of the historic vote.

The Hard Rock would become the first Indian tribe-owned operation to serve customers on the Strip. Although Florida’s Seminole Indian tribe owns the company, Allen said a separate board of gaming executives would make all decisions about the resort’s operations.

“I think it’s a wonderful opportunity and, as we stated in our deposition, we really do take our hats off to MGM. They’ve really maintained the property incredibly well, so we’re proud to operate it going forward until we make the switch to the Hard Rock brand.”

Brittnie Watkins, in her first meeting as chairman of the board, and board member Philip Katsaros voted to approve the licensing of Hard Rock. After final regulatory approval, the deal is expected to close within days. Allen said he’s excited about Hard Rock’s presence in Las Vegas.

“I think Las Vegas is still the gaming and entertainment capital of the world,” he said. “I think we all understand that Macau has a lot of business, but it’s not the same kind of destination that Las Vegas is. It is a monumental historic day for us to be a part of this incredible history.”

Regulators questioned top executives at licensing hearings, with many of the Seminole members of the company’s Board of Directors appearing in traditional tribal attire. Agnes Billie-Motlow and Carla Gopher greeted the Board of Directors in their native languages.

Board member Jim Shore, who is legally blind but traveled from Florida to Las Vegas, shared some of the tribe’s history. Katsaros said all tribal members seeking licensure had some of the cleanest background checks he’s ever seen.

The board also recommended licensing to Board Member Michael Rumbolz, who recently retired as CEO of gaming equipment maker Everi Holdings and previously served as chairman of the Board of Control.

Katsaros and Watkins had high praise for the app. “This property itself is iconic because it seemed to spark the rebirth of the Strip, the new Strip we see today,” Katsaros said ahead of his motion to pass the permit. “I’m very familiar with the Seminoles operation, the history, the success they’ve had in Florida and Atlantic City.

“It helps raise our game. Are they suitable? Absolutely. There is nothing (problematic) about their background. Does it help Nevada? Absolutely. This is going to raise the game for everyone on the Strip and everyone is going to have to do their best I guess since we have a new competitor in town. I congratulate them on entering the market and am happy to support the app,” he said.