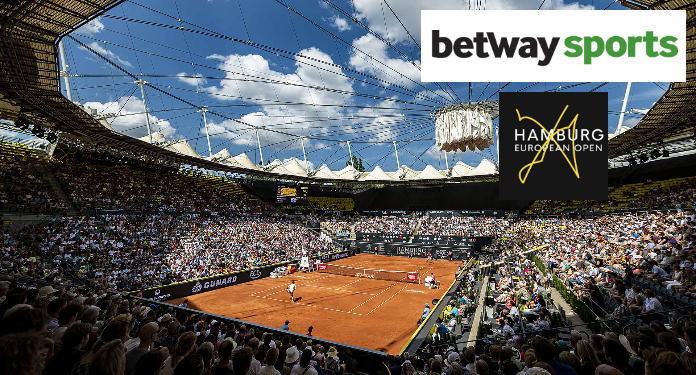 Operator Betway has been announced as the official sponsor of the Hamburg Open. The clay field tournament will run from the 7th to the 18th of July, following the calendar exhibition event: Wimbledon, which starts next week.

It was only last month when Betway was confirmed as the sponsor of the Swedish tennis tournament, the Nordea Open. The event will be held alongside the Hamburg Open as it starts on July 5th and ends on July 18th.

The operator now sponsors a number of tennis events, including the Miami Open, Noventi Open and the Copa Mercedes. As part of the latest partnership, the Betway brand will be visible on court and digitally throughout the Rothenbaum Tennis Center.

Betway CEO Anthony Workman said: “We are excited to be partnering with the Hamburg Open by becoming their official betting partner. The tournament is a highlight of the summer clay circuit and we look forward to seeing the Betway brand at the Center of Rothenbaum Tennis”.

Tournament Director Sandra Reichel added: “We are pleased to announce this partnership, especially in these unusual times, and I think it’s great that they are sponsoring the event in general, both in the men’s and women’s tournament weeks.

“In addition to being highly respected in their industry, Betway shares our commitment to creating a safe environment for customers. This was important to us when choosing a partner.”

In April, news broke that the Super Group, Betway’s parent company, was closing a deal to go public with an appreciation of around $5.1 billion (£3.7 billion).

The group is headquartered in Malta and Guernsey, supported by offices in London, Cape Town and the Isle of Man. In addition, the company is part of the European Sports Security Association, the Independent Betting Adjudication Service and the Remote Gambling Association.

The group also partners with the Professional Players Federation, which promotes and protects the collective interests of professional sportspeople in the UK