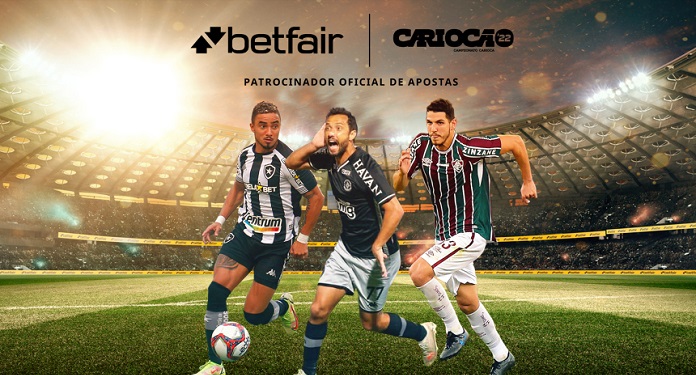 Official betting sponsor, Betfair announced the biggest naming rights deal among all state championships in the country. Cariocão Betfair then becomes the official name of the competition this season.

Responsible for the exhibition on open TV for the second year in a row, Record will show the Estado to 20 of the 26 Brazilian states and the Federal District, making Cariocão a national preference. While the bookmaker emerges as the main sponsor of the State this year.

Official partner of Libertadores and Sul-Americana since 2019, the bookmaker is now also linked to Campeonato Carioca.

“The Carioca Championship is one of the most exciting in the country and has a national reach. This partnership reaffirms Betfair’s investments in Brazilian football, and will offer fans not only a lot of excitement in each round, but also the best sports betting experience on the market”, commented Kimberley Daly, Marketing Director at Betfair.

Daly added: “In addition to being able to expect quality content, fans will be able to count on numerous betting opportunities for Cariocão, allowing them to experience the emotion of betting in every detail of the match while cheering for their favorite team. Betfair will stand side by side with fans who put faith in their clubs and believe that any result is possible.”

Record will show the 16 main matches of the State, which will be passed on to fans via streaming on YouTube, Facebook and Twitch. Cariocão Play, the competition’s OTT application, will grant access to the teams’ official channels, which will also be distributed on the social media of Botafogo, Flamengo, Fluminense and Vasco, in addition to two other types of exhibition: one with neutral narration, and the other , a novelty of the deal with Betfair.

“There is no doubt about the success that the partnership will be. Betfair becomes the most charming and most seen in Brazil. Whether due to the secular representation of the Campeonato Carioca, as well as the commercial deliveries on all platforms”, said the president of the Federation of Football of the State of Rio de Janeiro, Rubens Lopes.

With Carioca’s master sponsorship, Betfair will promote a series of activations. Highlight for the house logo, which will be on the trophy and medals for champions. The entire look of the broadcast booths in each of the stadiums was also designed to give visibility to the bookmaker, which will also have its mark on the official State ball.

The company also acquired numerous arena properties in every match, making Betfair officially have the first 360 delivery of national football. The agency Ogilvy Brasil, which performs advertising services for Betfair, will be responsible for all creative and media deliveries for the project.

The kick-off of Cariocão Betfair will take place this Tuesday, 25, in a clash between Boavista and Botafogo. In all, 12 clubs participate in the State and face each other in a single round corresponds to the Guanabara Cup. The top four places go on to the semifinals, with the winners vying for the decision, scheduled for April.