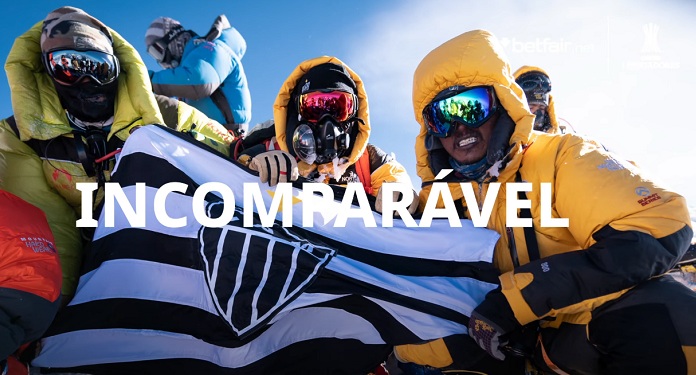 Gustavo Ziller’s passion for Atlético-MG was planted at the highest point in the world in 2021. The story of the Rooster fan who climbed Mount Everest and took the club’s flag to the top is the first of the “Unrivaled” series released by Betfair, on the date that the conquest of the first Libertadores do Atlético completed eight years.

The production will feature stories of passionate fans of national teams competing in the continental competition underlining Betfair’s slogan that “Every Results Is Possible.”

“The partnership we have with CONMEBOL is a reason to celebrate for us. Brazilian fans know that, on and off the field, anything can happen and that at CONMEBOL Libertadores, Every Result Is Possible”, commented Maria Flavia Losse, spokesperson for the Betfair.net.

Losse added: “We at Betfair.net want to celebrate and extol these incomparable moments with Brazilian fans and we hope that through our series, held with Goal Click, we can connect with these fans who share the passion for football”.

Story of the first episode of the production

The first story features a Minas Gerais club fan who promised he would climb Everest and carry the club’s flag. Thus, he accomplished this feat on May 23 this year, reaching the top of the highest mountain in the world, at 8,849 m, showing that even at 47 years of age “Every Results is Possible”.

Ziller revealed that he was born in love with Rooster. His grandfather Adelchi Ziller, who died in 2004, was one of the most important figures at the club in the 1980s. The athlete even played in professional teams during his adolescence and said that he cannot imagine his life without the feeling provided by football.

One of the best moments in her life was when she took her daughters to watch the Galo triumph over Olimpia, in the 2013 CONMEBOL Libertadores final in Belo Horizonte. According to Ziller, the feeling of reaching the top of Everest was exactly the same as the Libertadores title celebration.

“I don’t believe in superheroes, but in ordinary people doing extraordinary things. It’s always nice to remember Victor’s defense or the ace’s goal, but they’re not superheroes. They’re all people like us. They play with the collective . And I believe that the collective always does better than the individual. If it weren’t for that, 2013 wouldn’t have happened the way it did,” commented the mineiro.

In the fans for the second-time championship of the Galo this season, the fans have plenty of reasons to be proud. So far, only 26 Brazilians climbed Everest and he was the first in his state, and the first Galo fan to achieve the feat.

In all, the bookmaker series will feature three episodes with fan stories that demonstrate their passion for the most popular sport on the planet. “So we put football fans at the center of their own stories by showing what the sport really means to them,” says the Betfair description.

In addition, the production has a presentation by comedian Maurício Meirelles, ambassador of Betfair.net. “He used Everest to show that the impossible was his target and made an allusion to the Libertadores title for the Rooster. Each one has its impossible, but climbing Everest for me is babe. Betfair.net talks about how passion moves us and, when we have this very strong, really Every Result is Possible”, concluded Meirelles.