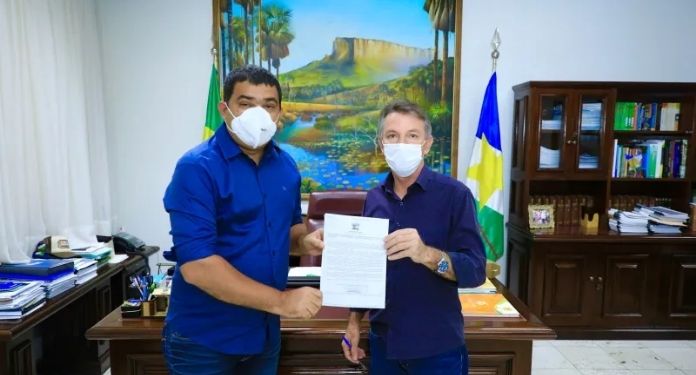 The Law that creates the public service of State Lottery in Roraima (Loterr) was sanctioned by Governor Antonio Denarium (PP).

The project was approved by Roraima state deputies with the objective of generating resources to finance socially relevant activities such as: public security, social security, sports and incentive to the development of the State.

In his justification, the deputy highlights that the Federal Supreme Court (STF) broke the Union’s monopoly in the exploitation of lottery games. This decision also allows states to take advantage of this type of service in the best way, using it as a source of alternative resources for federated entities, especially those facing financial difficulties.

Still on the subject, Soldado Sampaio comments: “With the creation of the State Lottery, we have the possibility of expanding operations and investments made both in encouraging the primary sector and in promoting industrial development in the State. part of the resources in sports actions and modernization of the security forces”.

According to the project, the Executive Branch is allowed to provide, directly or indirectly, pursuant to article 175 of the Federal Constitution, the services inherent to the State Lottery, by means of a concession preceded by a public tender.

The allocation of resources from the State Lottery in Roraima

With the law enacted, 40% of the funds collected from the sale of lottery tickets or betting, whether online or in person, will be used to collect income taxes levied on the prize pool and payment of prizes. 39% will be used to cover the cost and maintenance of the operating agent of the State Lottery in Roraima.

Then the remaining resources will be allocated as follows:

See the bill in its entirety below:

LAW No. 1,636, OF JANUARY 18, 2022 Establishes the Public Lottery Service in the State of Roraima – LOTERR and makes other provisions. THE GOVERNOR OF THE STATE OF RORAIMA

I make it known that the Legislative Assembly has approved and I sanction the following Law: Art. 1. The Public Lottery Service in the State of Roraima – LOTERR is hereby established, destined to generate resources to finance socially related to the promotion of social security, public security, sports and encouraging the development of the State of Roraima. Art. 2 The Executive Power may provide, directly or indirectly, in the form of art. 175 of the Constitution of the Republic, the services inherent to LOTERR by means of a concession, preceded by a public tender, observing, where applicable, the provisions of Decree Law No. 6,259, of February 10, 1944. Single paragraph. The indirect provision of the public service referred to in the caput of this article does not include authorization, accreditation, control and inspection, which must be carried out directly by the state Executive Branch. Art. 3. LOTERR may cover any of the lottery modalities provided for in Law No. 13,756, of December 12, 2018, except for the modality “fixed-odds bets”, pursuant to art. 29 of the aforementioned Law. Art. 4 The following are considered LOTTERR modalities: I – numbered state lottery (passive type): lottery in which the player buys an already numbered ticket, in physical (printed) or virtual (electronic) media; II – state lottery for numerical predictions: lottery in which the player tries to predict which numbers will be drawn in the contest; III – specific prognosis lottery, instituted by Law No. 11,345, of September 14, 2006: IV – state lottery for sports predictions: lottery in which the bettor tries to predict the outcome of sporting events; and V – instant state lottery: lottery that immediately shows whether or not the player has been awarded any prize. Art. 5 The product of the total revenue obtained through the capture of bets or the sale of lottery tickets, in physical or virtual environments, will be intended as follows: I – 40% (forty percent) for the payment of prizes, and the payment of income tax levied on the prize; II – 39% (thirty-nine percent) to cover costs and maintenance of the operating agent of LOTERR; III – 10.2% (ten wholes and two tenths percent) to the State Social Assistance Fund – FEAS; IV – 4.2% (four integers and two tenths percent) to the State Sports Incentive Fund – FEID, observing the following breakdown: a) 1.2% (one whole and two tenths percent) to encourage athletes who practice high-performance sports; b) 3.0% (three percent) to encourage other sports; V – 3.0% (three percent) for the Industrial Development Fund of the State of Roraima; VI – 1.2% (one whole and two tenths percent) to the Economic and Social Development Fund of the State of Roraima – FUNDER; VII – 0.6% (six tenths percent) for the Re-equipment Fund of the Fire Department of the State of Roraima – FREBOM; VIII – 0.6% (six tenths percent) for the Civil Police Modernization, Maintenance and Development Fund – FUNDESPOL; IX – 0.6% (six tenths percent) for the Military Police Re-equipment and Improvement Fund – FREA; and X – 0.6% (six tenths percent) for the Roraima State Public Security Fund. Single paragraph. The values ​​of the prizes related to the lottery modalities referred to in art. 4 of this Law not claimed by the contemplated gamblers, within 90 (ninety) days, will be reverted to the State Health Fund – FUNSESAU. Article 6. The Executive Branch will adopt security guarantee systems against tampering with physical and digital tickets. Single paragraph. The Executive Power will require from concessionaires and other service providers related to LOTERR a certification of health and smoothness of computer programs (software) and equipment (hardware) to be used in the operation of lottery modalities, as well as the adoption of practices dedicated to promoting responsible gaming and protecting the vulnerable. Article 7. In compliance with the provisions of Federal Law No. 9,613, of March 3, 1998, the legal entities operating LOTERR will forward to the Financial Activities Control Council of the Central Bank of Brazil – COAF, information about gamblers related to the prevention of money laundering. Of money and terrorist financing. Art. 8. The organization and operation of LOTERR will be regulated by means of a Decree of the Executive Power, observing the federal legislation when appropriate. Art. 9 This Law enters into force on the date of its publication.