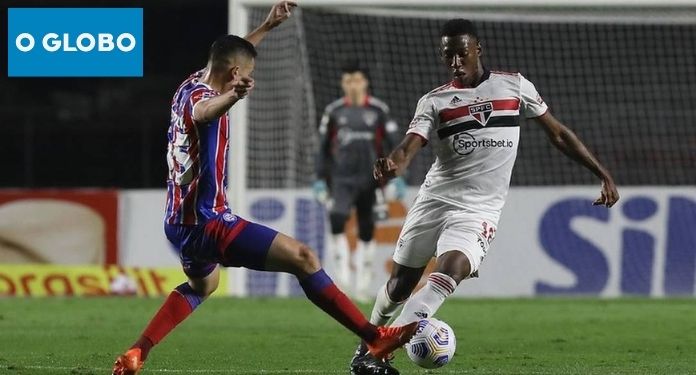 Sports betting is already a reality in Brazil, where many fans use betting sites and applications to bet on their teams in the most diverse tournaments.

The growth of the modality is reflected in the number of brands that are stamped on the shirts of the teams, which already sponsor around 85% of the clubs in the series A, according to news published on the O Globo portal.

In the article, we can check a small history of sports betting sites and their growth in Brazil.

Check out the news about the betting sites in full below:

Exalted as the “greatest in the club’s history”, the sponsorship of the website Sportsbet.io was announced last Friday by São Paulo. As the contract values ​​- valid for three and a half years – were not disclosed, it is not possible to confirm the weight given to it by the board. But the sports betting industry has proven to have the strength to do so. Recently in the market, the segment grew in a meteoric way in the scenario of sponsors of Brazilian football.

To get an idea of ​​this rise, in 2018 there were no betting sites on football clubs’ uniforms. In December of that year, law 13,758/18 legalized the sector. And, in 2019, the Serie A of the Brazilian Nationals had eight brands in 13 teams.

In the following season, marked by the impacts of the pandemic, the number of betting sites rose to 11 (a jump of 37.5% compared to the previous year). Sponsored clubs increased to 18 (out of 20 participants), an increase of 38.5%.

— A case that portrays well this “boom” of bookmakers is Betsul, which in this short period of two years has already taken on an extremely significant role. In 2020, the brand was the second most popular in uniforms from different clubs (four), only behind Unimed (health insurance cooperative, with six) – pointed out Vitor Fleck, director of the research and development area of ​​Insper Bussiness Sports , IBOPE Repucom partner in the elaboration of the Brazilian Championship sponsorship map.

The current season reaches halfway with equally relevant numbers in Serie A. Although the number of sites has fallen compared to 2020, the sponsored remains practically the same. There are eight brands in 17 uniforms.

Although values ​​are kept confidential, a fact indicates how the participation of this segment also grew in terms of financial volume. In 2019, only one bookmaker occupied the master sponsorship space — the most valued in the uniform. Currently, there are already five.

In Serie B, there are eight brands for the same number of clubs. In addition, the sites sponsor football federations, such as São Paulo and Sergipe. They are also on advertising boards in stadiums and in commercial breaks on specialized TV channels. For those who follow sports, they have become ubiquitous.

— These companies know that, when regulation is established, this will be a market in which whoever has the name in the user’s head will be a thousand steps ahead. So they are investing a lot of money in advertising – analyzes Fábio Wolff, managing partner of the Wolff Sports agency.

Two years after leaving illegality, the segment is still awaiting market regulation in Congress. This means, among other things, that the billions of reais moved annually are not taxed.

The relationship with sport is a two-way street. While clubs and entities benefit from advertising money, sites try to gain public trust by joining them.

In England, sites are on eight Premier League participants. But the most glaring case comes from the second division. Stoke City belongs to one of them, Bet365, which still names the club’s stadium. Concern about the number of gamblers led the British government to consider stricter regulations. Among the measures discussed is the ban on the brands being displayed on uniforms.

This is what happened in Spain. And both there and in England, clubs complain about the measure. After all, losing this money represents a severe blow to your finances.

— In Europe, sports betting has been regulated for years, if not decades. Here, we were not even able to establish a format for the concession of these services. There, some countries are already starting to talk about limiting the advertising of sports betting. Here, we don’t even leave the ground. Therefore, this subject may someday be on the agenda in Brazil. But it will certainly take time – says the lawyer Eduardo Carlezzo, a specialist in sports law.

In Brazil, it is still expected that the market itself goes through a sort of sieve. Still seen as a great novelty, the market attracts all types of investors. But, as in all sectors, this boom will not last forever.

— As with other new segments, as the habit of Brazilians to make sports betting develops and consolidates, the market will naturally organize itself with fewer, but stronger, players — bets Arthur Bernardo, business development director at IBOPE Repucom.