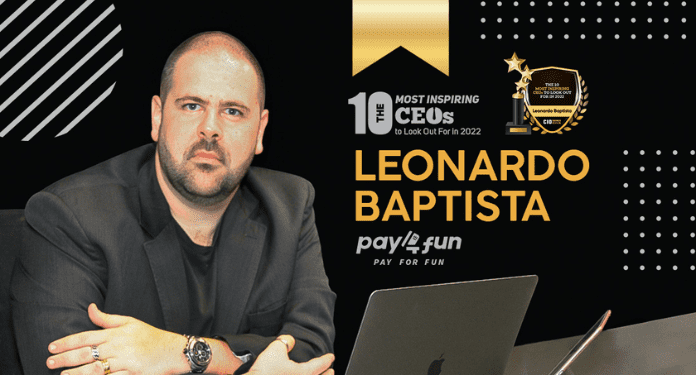 Leonardo Baptista, CEO of Pay4Fun, was considered one of the 10 most inspiring CEOs by the CIO Business Review. The entrepreneur’s interesting trajectory caught the attention of the CIO, who considered him among the 10 most influential executives in the business world.

A little about Leonardo Baptista

Even before founding Pay4Fun, Baptista was very focused on the technology market, where he did his first internship at the age of 14. He trained as a systems engineer at Microsoft and, after exploring technology, entered the entertainment industry.

In 2018, he decided to dive into entrepreneurship and make his dream come true, as he noticed a big gap related to the financial aspects of online entertainment sites in the Brazilian market.

“That’s when Pay4Fun was born, physically shy, occupying only one room, but grandiose in the future objective that was quite audacious for a young entrepreneur”, says Leonardo. “That’s because I knew the great potential of P4F and was able to count on great partners who embarked on this entrepreneurial journey with me.”

Today, Leonardo Baptista is responsible for the company’s image in the market. He also devises strategies to ensure Pay4Fun’s continued exponential growth.

Since its launch, Pay4Fun has experienced explosive growth. In just 18 months, the company started to earn 7 times more than the amount invested, per month.

Leonardo also actively participates in national and international fairs and events to build relationships with customers and potential partners. At events, he looks forward to experiencing not only his own business, but also that of his partners, as he believes that only then will they know how to do it the right way.

For Pay4Fun’s CEO, resilience is not being afraid to fail. Adversity must be faced with determination and a positive spirit, also cultivating the ability to bounce back from failures. “Get up and come back stronger” says Baptista.

Pay4Fun brings technology, security and entertainment to customers in Brazil

Pay4Fun is an online financial transaction platform that allows you to make deposits, payments and transfers in a practical, fast and secure way. The company is authorized by the Central Bank of Brazil and has commercial partners from all over the world.

The company brings the safest, fastest and most efficient solutions in financial transactions to the digital environment. Making the day-to-day life of consumers and merchants easier, through a simple and intuitive platform, Pay4Fun also promotes differentiated service at all levels.

More than 300 merchants already have Pay4Fun integrated into their websites. By adopting Pay4Fun as a payment method, both merchants and end consumers can count on state-of-the-art technology, which provides transfers, withdrawals and other features quickly and safely.

A crucial point that differentiates Pay4Fun from other fintechs is its service. All interactions are done by real attendants. The support service works 24 hours a day, 7 days a week with agents constantly trained to bring effective solutions.

Being listed as one of the most inspiring CIO leaders is a great pride for Leonardo Baptista and Pay4Fun.