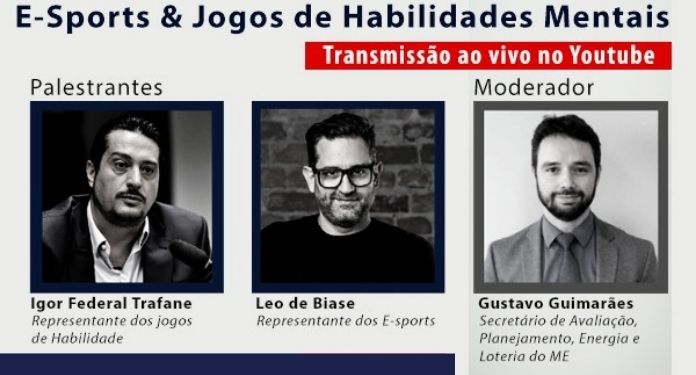 This Thursday (16), the future of skill games in Brazil was the main theme of the event “eSports & Mental Skill Games”, which brought together more than 15 thousand live viewers, through an online transmission on YouTube.

The biggest Webinar so far held by the Secretariat had received around 300 views. Yesterday’s meeting was therefore 5,000% larger than the now second largest seminar in SECAP history. The debate was attended by the Secretary of SECAP, Gustavo Guimarães; the President of the Panamerican Poker Confederation (CPPD) and the Brazilian Association of Skill Games (ABJH), Igor Federal Trafane; and businessman Leo Di Biase, CEO of ESL and founder of BBL, one of the largest e-sports companies in the world. Secretary Gustavo Guimarães opened the event reinforcing the importance of the government discussing the matter at this time.

For him, denying this growth and not looking at the development of new technologies and new forms of social expression is a delay in the country’s economic growth. “We are facing a window of opportunity for the regulatory advancement of Skill Games in the country, where logical thinking, cognitive ability, intellect and other player skills prevail over chance.”

“We have a promising and rising market, which can stimulate post-pandemic economic activity, attracting investments, carrying out large events, generating business, employment, income, revenue and, why not, entertainment,” stated the Secretary. “In addition, we must take into account how eSports expand the cognitive capacity of individuals. This is a fundamental aspect, but it can sometimes go unnoticed, which is the formation of human capital so important for modern societies.”, completed Gustavo .

The impressive number of audiences yesterday did not go unnoticed by Under-Secretary, Waldir Marques: “It was the biggest Webinar ever held by SECAP and the Ministry of Economy as a whole. Probably one of the biggest in the history of the Government.” With the well-known ability of Igor Federal to mobilize a large volume of people for public hearings and seminars on the subject, SECAP carried out the transmission on YouTube, thus avoiding overloading the Ministry’s servers and an eventual interruption of the transmission.

The hashtag #JogosDeHabilidad and #RegulaSecap – used to engage the subject during the event – ​​were among the most talked about topics on the internet on the day. Igor Federal Trafane, one of the biggest names in national poker and the main responsible for the development of the sport in Brazil, also defends that the regulation will allow the country to have an economic activity capable of moving many investments, revenues, taxes and generating thousands of jobs.

In addition, it will generate new income, professionally recognize players and consolidate championships and competitions throughout the national territory, spreading the sport even more and opening new fronts for the economy.

Games invaded the hearts and minds of Brazilians; and the country already occupies third place in the ranking, losing only to China and the United States, with the main modalities launching champions. The market will move more than R$ 6 billion reais in 2021, according to PWC. “Like poker and other skill sports, e-sports still suffers from a lack of regulatory policy. Our market is huge, so we have to protect it and find ways with the legislature and executive to get it going, progressive, liberal, without barriers and with more incentives, so that we can grow more and more”, concluded Di Biase. After the presentation, there was a question and answer session, which were sent in by the guests. The full live is available on SECAP’s Youtube.