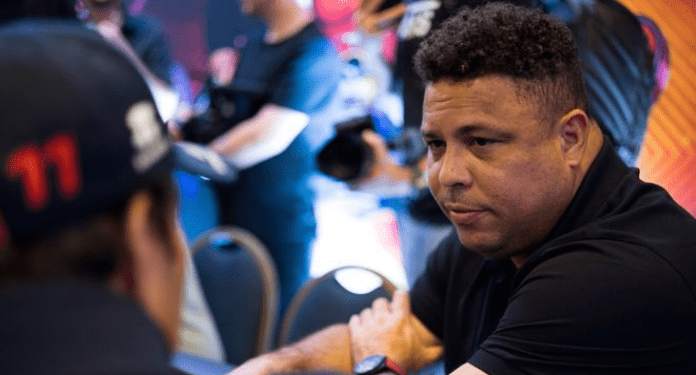 According to the opinion of the PokerStars ambassador, Ronaldo ‘Fênomeno’, Brazil will win this edition of the World Cup. The legendary player has already won the competition twice (1994 & 2002). The ace recently spoke about the World Cup, his passion for poker and the future of poker in Brazil.

Ronaldo, who was part of the last Brazilian team to win the World Cup, more than twenty years ago, speaks with optimism and mentions that Brazil has always been consistently among the favorites to win the competition.

“We all know the World Cup and the Brazilian team well,” he said. “We always go with a very big favoritism in relation to the other teams, but the challenges will be the ones we already know. Mainly the European teams that have been playing very well for some years now. Since 2002 it has had this European dominance in winning the World Cup titles”.

The supposed ‘European dominance’ is not an exaggeration, as since 2002, only one team from outside Europe has reached the World Cup final (Argentina in 2014) – while Italy, Spain, Germany and France have all lifted the famous World Cup trophy. of FIFA World in recent editions.

However, Ronaldo remains very optimistic with the Brazilian national team, believing that the scenario of recent years could change already in the Qatar tournament.

Whether in football, Formula 1 or poker, the Brazilian public is mainly known for its passion for the sport. In this sense, Ronaldo seeks to help people achieve in poker and in other segments: “Whatever you do with passion, you will do better and the results will be better. In poker it is no different”

“I think we all try to do our best in each area and with great passion. Whatever you do with passion, you’ll do better and the results will be better. Poker is no different.”

‘Phenomenon’ passion for poker is not new, as he already worked with PokerStars in 2013, helping to expand the segment and changing people’s mindset in relation to the game of skill. “We all know that poker was a very marginalized game. And we started to change that, showing what poker can do and how the game works. And we did it successfully. All Brazilians know the difference between the game of poker, which It’s a sport of the mind, and gambling.”

Ronaldo regularly shares his online poker games with his Twitch followers. The legend spoke about: “Playing online for my followers on the internet on my Twitch channel has also been a very nice experience. Sharing this time with the guys, having fun with them, doing some cheap tournaments for us to have fun. It’s been really cool.”

He also commented on the possibility of participating in live poker tables: “Poker is a passion that I have. And I remember well the last time I had a partnership with PokerStars. It was really nice to be able to travel the world, getting to know some cities and playing poker.”

Ronaldo’s biggest live poker result was achieved when he hit a deep run in the 2015 PokerStars Caribbean Adventure (PCA) Main Event, finishing in 26th place for $42,180.