Início Online After closing with Sorare, Atlético-MG becomes the first team in Brazil to... 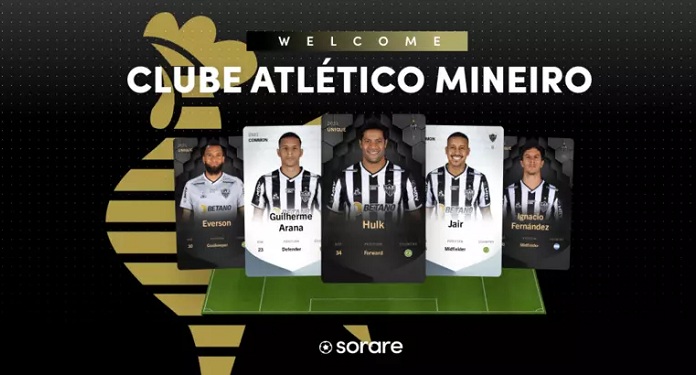 Atlético-MG will become the first national soccer team to have NFT (non-fungible tokens) cards from their athletes, due to a closed agreement with the Sorare platform. In this way, fans from all over the planet will be able to purchase cards from Hulk, Keno, Guilherme Arana, among others.

Founded in 2018, the French platform is seeking to expand the sector, betting on cards registered in blockchain. Recalling that Sorare offered the sale of the letter of striker Kylian Mbappé, of PSG, for about 55 thousand euros (R $ 350 thousand in the current quote) in December 2020.

Operation is simple. Sorare signs a partnership with football clubs and manages to license athletes’ cards on Ethereum, a platform that makes contracts using the blockchain. This means that these items are unique and can be converted into collectibles.

Sorare also has a second operation to engage the 100,000 active collectors today. The cards purchased on the website can be used in the company’s fantasy game, SO5, which works similarly to the popular Grupo Globo’s Cartola.

Each player chooses five cards to compose his team, being necessary to have a goalkeeper, a defender, a midfielder and an attacker. The clubs are divided into divisions according to the level of the selected cards and duel in tournaments every week. The performance of fantasy teams is based on the actual performance of the chosen athletes.

At the end of each competition, the performance of the five cards is added together to reveal the total score. The prizes are passed on in ether, the cryptocurrency used in Ethereum, or in cards from the game itself.

Sorare CEO celebrates the beginning of the relationship with the Rooster

“We are very excited about the arrival of Atlético, and just beginning. The Brazilians, even without having any local club available, already occupied the ninth place in terms of active players on the platform and the third place in terms of time spent on the site (1h32 per In addition, there has been a 47% month-on-month growth since January 2021 “, stressed Nicolas Julia, CEO of Sorare.

The executive added: “Among all the markets in which we operate in Latin America (Mexico, Argentina, Brazil and Colombia), we expect Brazil to be the country that adopts the most football NFTs. We want it to be one of the top five nations in terms of adoption and, for that, we are trying to sign agreements with local football legends and the entire Serie A of the Brazilian. “

To understand this sector, it is necessary to go deeper into the creation of the letters. Cards are created at the beginning of each season, from licensing contracts directly with clubs, and are separated into four levels: unique (1 copy), super rare (10 copies), rare (100 copies) and common (free) unlimited).

This means that if a player acquires a unique card from the striker of the Rooster, Hulk, this season, no one will be able to have an equal. However, cards from past seasons can also be used. Only that card, must be purchased in the initial auction or from a player willing to resell.

The initial offer of the cards, the part on which Sorare and the clubs bill, always starts at the value of 5 euros (approximately 30 reais). Active players are part of a limited-time auction, until someone finishes the item in question. In 2021 alone, the platform handled around 60 million euros (R $ 382 million reais).

The Brazilian club has shown interest in the crypto market for some time. In 2018, the team from Minas Gerais even created their own digital currency, GaloCoin, but without much support from their fans at the time. Now, the Rooster is determined to invest even more in this type of business.

“We believe that not only the fans are better prepared, but the club as well. Sorare is a consolidated partner, which already works with major global clubs and is in more than 140 countries, which gives us confidence that the project will be a great success, “said Felipe Ribbe, head of club innovation in an interview with CNN Brasil.

Ribbie concluded: “And we have other plans. We are going to auction an exclusive work that represents a historic moment for the club, the defense of goalkeeper Victor in the match against Tijuana, for the quarterfinals of Libertadores 2013. We call Pedro Nuin, an artist known for recreate great moments of football, and he made a digital painting that will be auctioned from May 10th on the opensea.io platform ”.