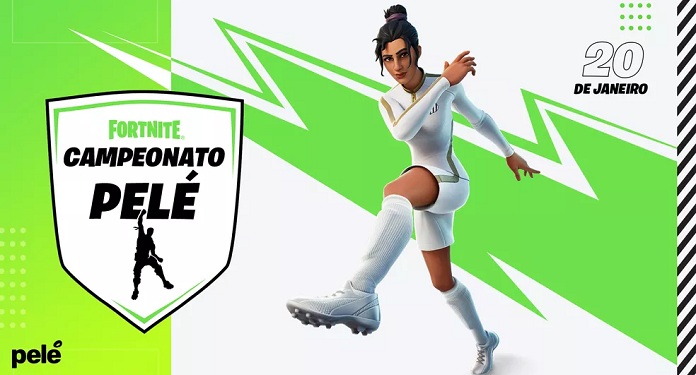 Epic Games entered into a partnership with Edson Arantes do Nascimento, Rei Pelé. The company must promote some special actions and the first will be the Pele Championship. Accessible to the public over 13 years, the Fortnite tournament will be held this Wednesday fair, 20.

To participate, just be in accordance with the rules stipulated by Epic Games and guarantee yourself in the Open League (Division I, II or III) or higher until the beginning of the competition. Soon after, just enter the space “Compete” and find the location for the Pele Championship inside the game.

Each competitor will be able to act during the sessions in the respective regions, which should last about three hours with a limit of ten matches per session. In the national territory, the tournament must take place from 18h to 21h (Brasília time).

Participants will be able to win not only a personalized Santos shirt signed by the best football player of all time, as rewards linked to the King of Football for the game, such as the Soco no Ar de Pelé gesture and the Pontapé Inicial set. These and other special items will be officially released on January 23.

The kickoff set is a way for Fortnite players to demonstrate identification and support football clubs within the game.

When the package is available, participants will be able to choose from 10 variants of female and male models of teams from Brazil and abroad, such as Santos, Bahia, Sevilla, Milan, Rome, Sporting, Inter Milan, Juventus, Manchester City, among others .

Pelé’s ‘arrival’ to electronic sports serves to crown this booming moment for the sector around the world. Since last year, eSports have shown that they are an engaging offer of content that is leading more and more people to follow their favorite teams and bet on official competitions.