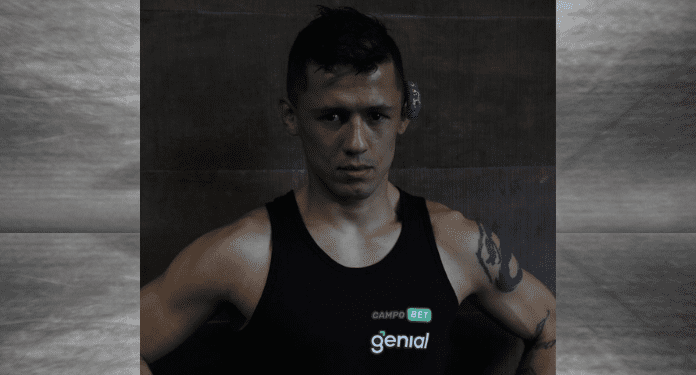 Dudu Dantas, 33 years old, an athlete sponsored by Campobet in MMA, has his next challenge in the sport already scheduled. On October 16, for the Eagle Fighting Championship, Dantas will face, possibly, the Russian Tibur Valiev, in Miami, in the United States. With a record of 23 wins and only seven losses, Dantas still has a Bellator title on his resume.

The bantamweight from Nova União talked about the next opponent he will face, a fight that leaves him very excited about his future plans. “The next fight should be on October 16th, still pending confirmation. It will be for Eagle FC in Miami. My next plans are to take down every opponent they put in front of me. My next opponent, which is not 100% confirmed yet, for me, is great. It’s Tibur Valiev, who had five wins in the UFC and only one loss. For me, this fight makes perfect sense and I’m really excited if he’s really my next opponent”, commented the fighter.

Campobet, through the manager responsible for Brazil, Isaac Mizrahi, spoke about the partnership with the MMA athlete. The company reported that supporting the growth of sport in the country is a way to positively enter the Brazilian market, especially in expanding modalities.

“Campobet has entered the Brazilian sports market strongly, supporting successful athletes and teams. Dudu Dantas is another example of this. A former world champion of MMA, with an enviable curriculum and that is always in the headlines of the sport. Like him, we also support Leoas da Serra, the most successful women’s futsal team in Brazil, and soccer player Djeni Becker. All of them professionals.”

Dudu is coming off two good wins in his last two challenges. In Shooto, a submission against Michel Aquiles, in an event in Brazil. In the United States, in the Fighting Alliance Championship, the athlete won a beautiful knockout with a kick to the head over Jose Alday, under the watchful eye of Dana White, UFC boss.

“I come from two wins, a knockout and a submission. I believe that this moment in my life has been very good professionally. I’ve been focusing a lot on my mind. I’ve always had excellent physical conditioning, I’ve never had any problems with weight or the technical part. So, I’ve been working my mind a lot and this has helped me to take advantage of the opportunities that have come up. You can be sure I’m a new Dudu. If you know me yesterday, you don’t know me today. I grow every day,” he said.

The athlete recalled the close deal with the UFC and stated that he still doesn’t understand the reasons that made the deal not work out. However, he guarantees that the best bantamweight in the world is not in the most famous MMA event.

“We almost got it right with the UFC, but it didn’t materialize. To this day, I don’t know why I didn’t get it right. Once the contract that I fought FAC was through Zuffa, with them paying for the tickets, the scholarship and everything. They asked for this fight. And the result was incredible, with a knockout with a kick to the head. I knocked down, dominated the fight, did everything that could be done”, he explained.

“But we didn’t agree on the deal and soon after I signed with Eagle FC. And my job as an athlete is to dominate every fight that comes my way. So, what I can say is that the best bantamweight in the world doesn’t he’s in the UFC, he’s in the Eagle and he’s going to fight on October 16th in Miami”, concluded Dantas.

Founded in 2018, CampoBet is a bookmaker that arrived in the national market recently and already has an impressive income, with expressive growth in social networks.

The company provides bespoke betting possibilities in pre-match and live events. The platform offers, in addition to sports betting, online casino games developed by the most famous providers in the sector.