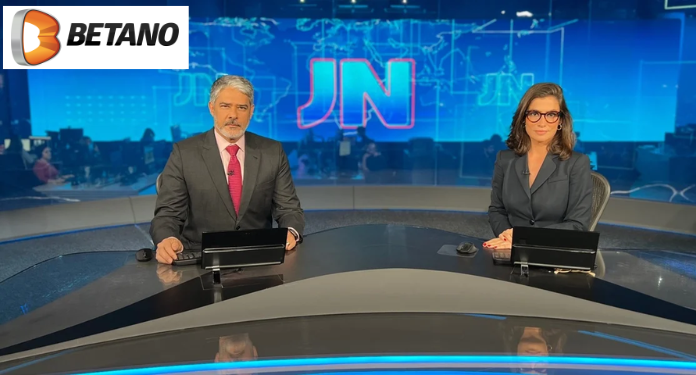 Betano, one of the best-known bookmakers in Brazil and in the world, closed a sponsorship partnership with Globo’s Jornal Nacional. The iGaming company signed a multi-million-dollar contract to expose its brand on the TV news program led by William Bonner and Renata Vasconcellos.

The betting segment has, for two years, registered a growing popularity in Brazil, however, due to the lack of legalization, the practice is in the sights of the federal government. With spaces between the intervals of Jornal Nacional since last week, the bookmaker closed a contract with Globo until December this year.

Betano’s objective with this agreement is to take advantage of Globo’s prime-time audience, which should grow significantly from November, when the Qatar World Cup begins.

Although we don’t have many details of the deal, the agreement between the bookmaker and Globo is part of a policy of the carioca broadcaster, which seeks to sell sponsorship quotas on a temporary basis to its programs.

The price available to the advertising market is R$ 15 million for 30 days. The estimate is that Betano will pay R$ 45 million during the three-month partnership with the broadcaster. It is worth remembering that since the end of last year, the journalistic program did not have a master sponsor in its editions.

Despite the large presence of these brands in Brazil and the millionaire agreements, some football clubs, federations and even Globo were notified by the Ministry of Justice and Public Security of São Paulo for having relations with a company in the field.

Created by Federal Law 13.756/18, sports betting has a great engagement among Brazilian fans and fans. However, the law has not yet been regulated and, because of this, Senacon (National Consumer Secretariat) suspects that, in some cases, activity may be being explored without adequate supervision.

Globo has already stated that there is no illegality in its agreements with bookmakers: “It is important to reiterate that the placements of campaigns by all our advertisers respect the guidelines of Globo’s Commercial Practices Manual, which consolidates the best practices, legal norms and ethics of the advertising market and meets the self-regulation standards adopted by Conar (National Council for Advertising Self-Regulation) and by CENP (Executive Council for Standard Norms)”.