Início Sports Betting Betwinner distributes prizes in a new campaign in the city of São... 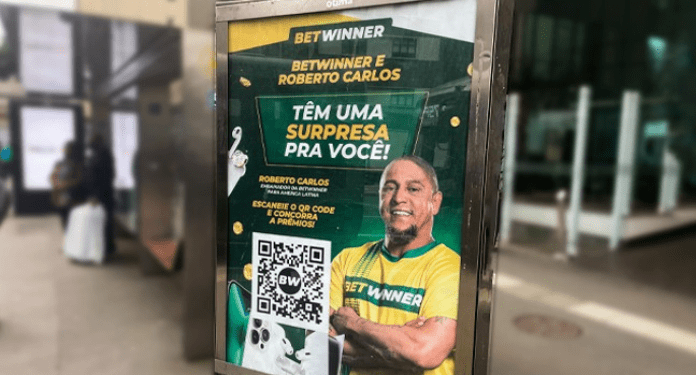 Betwinner, a European bookmaker that has been operating online since 2016, is looking to expand its activities all over the world with a top-notch and extremely competitive service. In Brazil, the platform has been present for over 4 years.

The bookmaker, in partnership with its brand ambassador, Roberto Carlos, former left-back of the Brazilian National Team, carries out offline and online activations, including several advertising campaigns ranging from enveloped buses circulating through the streets of the capital of São Paulo, to raffles in networks. social media that have already rewarded followers with Real Madrid shirts autographed by the legendary left-back.

Now, in September 2022, Betwinner is carrying out another activation in São Paulo and, this time, it takes place at bus stops in the capital. The new campaign works like a ‘treasure hunt’, with banners by Roberto Carlos and the bookmaker spread across 104 bus stops in the busiest areas of the city.

At each point a QR code will be found on the banner, where everyone can scan and hope to be lucky enough to be directed to the draw page. Prizes range from iPhones 13, Playstations 5 to Airpods Pro, which will be distributed daily.

The new campaign will help the company to further expand its reach in the national territory, especially in the state of São Paulo, one of the busiest and most important regions for the Brazilian economy.

Founded in 2007 and operating online since 2016, Betwinner is a young and dynamic bookmaker with a team of highly experienced professionals, all dedicated to delivering the best experiences to its customers and sports betting fans.

Currently, the betting brand has a strong presence in the markets of Europe, the Middle East, Asia, Africa and South America, demonstrating a strong orientation towards international business.