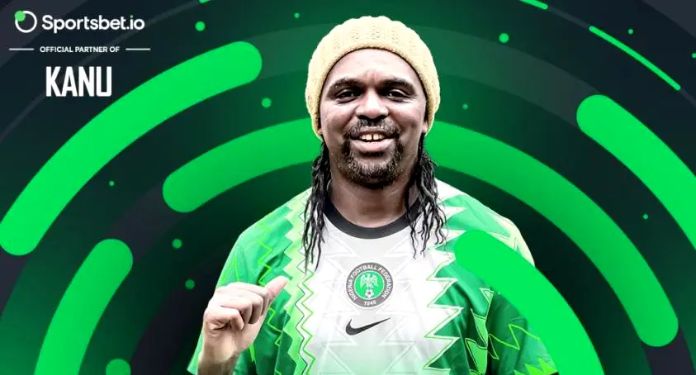 Sportsbet.io has announced a major partnership with Nwankwo Kanu, who will now join the company as a new global brand ambassador, expanding the platform’s list of African partnerships.

The former Nigerian player has agreed to a four-year deal with Sportsbet.io that will see him participate in a series of promotions along with so-called “special activities”.

“Signing with Sportsbet.io was the perfect opportunity to join the crypto revolution,” said Kanu. “I’ve already seen how the crypto world can be a force for good in our world, with the Kanu Heart Foundation receiving significant bitcoin donations. I will be working closely with the team at Sportsbet.io to help spread the word.”

Founded in 2016 as part of the Yolo Group, Sportsbet.io is a cryptocurrency betting site currently looking to capitalize on the growing popularity of bitcoin in Africa, among other locations.

To this end, Kanu is the latest in a series of African celebrities that Sportsbet.io has partnered with. Past personalities include Kenyan rapper King Kaka and South African rapper Cassper Nyovest, as well as Afropop star Tekno Miles.

Additionally, Sportsbet.io hosted an “Ahead of the Game” event in Lagos, Nigeria last month where Kanu joined several hundred people to see his old team Arsenal take on Manchester United.

As part of a one bitcoin (BTC) donation at the event, a donation of 250 millibitcoin (mBTC) was made to the Kanu Heart Foundation.

“Nwankwo Kanu needs no introduction, he is a true football legend and it is an absolute honor to see him join Team Sportsbet.io,” said Albert Climent, Head of Sportsbet.io Africa.

“More people around the world are learning that the best way to bet is with crypto. Stay informed for some very special promotions involving Kanu and our other fantastic ambassadors,” added Albert.

With a prize of BRL 1 million, Pixbet launches a 2022 World Cup pool