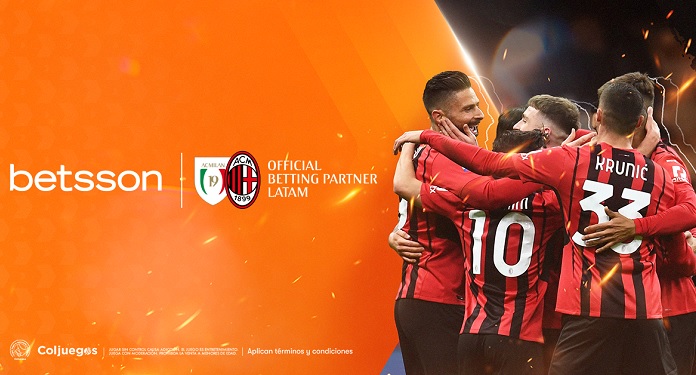 Italian champions AC Milan have just announced that Betsson has signed an agreement with the club to be their official regional partner for Latin America. This agreement builds on Betsson and the Italian team’s shared passion for football and the positive value it has in the region.

The new partnership confirms AC Milan’s global character, consolidating its presence in a historically important market for the club, where some of the biggest Rossoneri stars such as Ronaldinho and Kakà come from.

The partnership with the European team will further increase awareness of the Betsson brand in Latin America, in line with the strategy of the online betting and casino operator for the region where in the last two years it has been solidifying its presence in several markets, such as Brazil, Argentina, Colombia, Mexico and Peru.

Andrea Rossi, Commercial Director for South America at Grupo Betsson, said: “The exclusive partnership with AC Milan in Latin America strengthens our expansion drive in the region and allows us to expand our content offering and collaborate with a club oriented towards innovation”.

The director added: “Our common objective is to offer a more modern and engaging sports narrative, creating high-quality entertainment for Rossoneri fans in South America”.

AC Milan Chief Revenue Officer Casper Stylsvig added: “Joining forces with Betsson helps us get closer to our local fan base of over 75 million people. Latin America is a very special market for Milan and where we really feel the passion for the Rossoneri colours, so we couldn’t be more excited to start this partnership.”

As part of this partnership, Betsson will have exclusive use of AC Milan’s IP within the category in Latin America, brand visibility on stadium perimeter LEDs and on the acmilan.com website and app.

In addition, the partnership includes the creation of a rich editorial calendar filled with exclusive content, designed to engage Latin American fans in a fascinating experience and make them feel closer to their favorite European football team.

Despite clearly being a competitive championship until the end, according to the odds experts at Betsson, Milan had approximately a 20% chance of winning Serie A (Italian Championship) in the first rounds, and the highest chances of winning before the penultimate round , with 57%. The team was followed by Internazionale, with 43%. This is Milan’s first title in 11 years.

With more than 20 brands in the portfolio, including Betsafe.com, Betsson.com, NordicBet.com and CasinoEuro, the Swedish group is one of the biggest references in online gaming in the world, offering entertainment and fun for more than five decades.

In Brazil, Betsson is the first and only licensed operator in the market for sports games, such as horse racing betting, in partnership with the Jockey Club of Rio Grande do Sul, and fantasy games.