Início Sports Betting With dominance in Brazilian football, bookmakers await the regulation of the modality 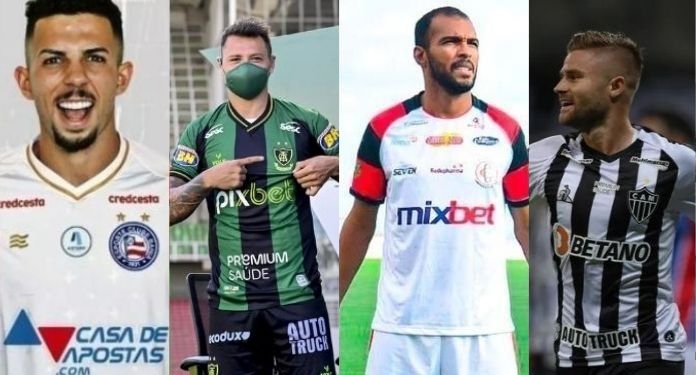 It is now no secret that sports betting is spread across Brazil, with several bookmakers investing in football club sponsorships and marketing aimed at the game.

Although bookmakers are already present in much of the country, there is no defined legislation on betting; but everything indicates that by the end of the year there will be complete regulation of the sports betting modality.

Folha de São Paulo recently published an article detailing, in numbers, some of the impacts of bookmakers in Brazil, which are currently awaiting market regulation.

Check out the full article about sports betting houses below.

Of the 40 teams that compete in the A and B series of the Brazilian Championship, 35 have something in common: they are sponsored by sports betting sites. A market not yet regulated in the country, with companies hosted abroad that do not generate jobs or pay taxes in the country.

That will change if the federal government regulates the activity by the end of the year. Among the main teams in the country, the exceptions are Brusque, Grêmio, Novorizontino and Tombense.

It’s not just on teams that brands are exposed. Industry companies sponsor sports programs, hire celebrities to star in advertisements and pay digital influencers to promote their brands.

There is no definitive number for the size of this market nor a precise estimate of the growth that could occur with regulation. Entrepreneurs interviewed by Folha estimated that, with the regulation, it is an industry that can move something between R$ 20 billion and R$ 100 billion.

With any of these values, it will be a small part of economic activity that is expected to reach US$ 140 billion annually in 2028 (R$ 721 billion at the current price), according to research by Grand View Research.

“A new industry will be created, with new professions, and Brazil can become a technology center”, evaluates Ricardo Rosada, head of marketing at gala.bet.

The investments made in sponsorship in Brazilian teams occur, in part, in the hope of expanding the market and regulation.

Bookmakers are authorized to operate because of law 13,756/2018, enacted by then president Michel Temer four years ago. But she determines that the matter needs to be regulated by the Ministry of Economy by the end of 2022. Companies that maintain websites in Portuguese, advertise and sponsor national clubs are not based in Brazil. They usually have their offices in countries like Malta, Curaçao or Gibraltar (where most of them are).

“The longer the regulation takes to come out, the less money Brazil will collect in taxes. The absence of regulation leaves the Brazilian market legally insecure, both from the point of view of the operator [the bookmaker] and the consumer [gambler]. will bring, for example, greater security for the gambler to receive prizes, as he will be able to claim his prizes in Brazilian Justice”, says Udo Seckelmann, lawyer specializing in sports and betting at the Bichara e Motta office.

There have already been problems. And, in case of any disagreement, there is no one to complain to.

“They operate in a gray area, and it has been a long time. They are in Malta, Curaçao, Gibraltar. They operate abroad with sites fully translated into Portuguese. can’t withdraw. There’s nothing to do, except file a lawsuit in the site’s country of origin. It’s a gray market”, explains Eduardo Diamante de Sousa, a lawyer specializing in sports law and betting at Carlezzo Advogados.

The strategy of sponsoring clubs and making brands known is to be ahead at the time of regulation. Companies believe that this will happen, despite resistance from sectors of the government of Jair Bolsonaro (PL). Damares Alves, former Minister of Women, Family and Human Rights, has said in the past that he is against it.

There is suspicion about the lack of movement on the subject, the limited time until December and the fact that this is a presidential election year. But congressmen involved in the matter are optimistic about the possibility of everything being resolved.

Federal deputy Felipe Carreras (PSB-PE) agrees with the view that the lack of regulation creates an environment conducive to the spread of irregular bookmakers, in addition to wasting a potential source of taxes for the state.

Currently the rapporteur of the bill that creates the new Pelé Law, he adds that the regulation needs to include mechanisms that guarantee that the money collected is, in some way, reinvested in Brazilian sport.

“The lotteries have to favor the sport. If there’s nothing about it, I’ll work with the sports community so that this is present in our new legislation for Brazilian sport”, he says.

Last week, Games Magazine Brasil had access to the third draft of the regulation that will give the Ministry of Economy the power to authorize and inspect sports betting in Brazil. According to the publication, each license would cost R$ 22 million.

When consulted by the report, the Ministry did not comment on the matter.

The consensus among experts heard by Folha is that the number of bookmakers in Brazil should fall and stabilize. Currently, there are between 400 and 450. If the value of around R$ 20 million for the license is confirmed, the space may be restricted to a few companies, the largest.

“It is a rate that can hinder and make unfeasible the entry and emergence of new operators in Brazil”, believes Seckelmann.

The hope of Brazilian clubs is that the impetus to spend on sponsorships does not diminish. Atlético Mineiro, the current Brazilian champion, receives around R$10 million a year, for example.

“The economic impact [of the entry of bookmakers] is gigantic, since it is a segment that affects the entire marketing and advertising industry in the country, in addition to needing manpower. In recent years, the market has been very occupied by betting site brands, and the trend is that this space will remain with Brazilian companies”, bets Hans Schleier, marketing director of the website Casa de Apostas.