Início Sports Betting With news for 2022, Rivalo announces renewal of Naming Rights for the... 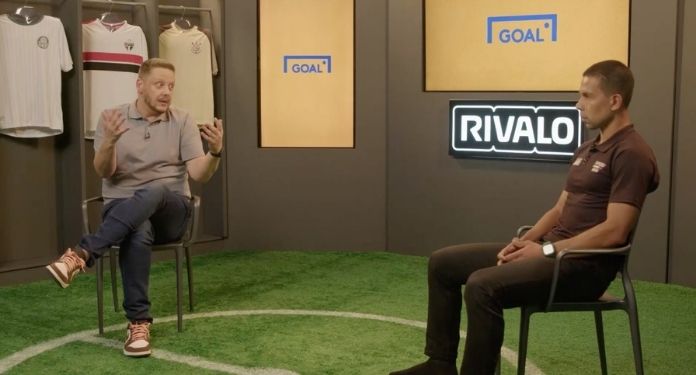 A sports betting company, Rivalo continues to invest in innovative actions on the national scene. Now, the bookmaker has just announced the renewal of the Naming Rights of Footballco’s GOAL Betshow program and promises a series of news for a new ‘leave’ of ten episodes.

The new season of the attraction will be shown between April and December, on GOAL platforms, and will continue with a presentation by journalist Bruno Laurence. With an average duration of 45 minutes per episode, GOAL Betshow by Rivalo will have studio recordings, always with the presence of a special guest.

The new season already has confirmed participations from five-time world champion Cafu, journalist Mauro Beting, and other influencers from the Rivalo team.

And, the guest personality will be in all blocks of the attraction, which will have monthly editions. Guilherme Bucchi, explains the change from the live format to a program recorded in advance: “The new format will allow us to analyze more matches, choosing the most interesting within each month, and even include other sports”.

The public will be able to check pre-game analyzes and analysis of various sports, covering the main competitions on the planet. Another attraction will be the “review mode”, in which unusual stories from guests and the audience in general will be approached in a relaxed way.

“We are very happy with the new season of GOAL Betshow by Rivalo. The show is a clear evolution of the partnership and content developed in 2021. The essence of GOAL’s BetShow remains the same, but it gains a new home. In this post-pandemic phase, we inaugurated the studio created exclusively for the program, which also has more interactive and dynamic boards, thinking about the GOAL audience”, comments Vanessa Monteiro, Head of Sales at Footballco in Brazil.

The new season of GOAL Betshow by Rivalo will premiere in April and the program will be produced by GOAL. However, it is important to note that Rivalo intends to hold some editions with special themes, such as a program entirely focused on basketball, the Champions League final, the 2022 World Cup, among others.

The purpose of GOAL Betshow by Rivalo is to offer sports betting fans analyses, data, statistics and tips to make more informed decisions when betting on the Rivalo platform.

Guilherme emphasizes the importance of promoting an attraction of this type to strengthen the brand with Brazilian fans and bettors: “The Brazilian market is still very new, and we want to show that it is very easy to bet and have fun, using the numbers we normally use in conversations. bar to win with the bets”.

Rivalo’s betting system is operated by Matchserv Solutions NV, a company founded under the laws of the government of Curaçao.

The betting company, leader in the market, has been increasingly consolidating its presence in Brazil, seeking to expand opportunities and bring Brazilian fans closer to the betting world. The bookmaker offers opportunities in major sports such as football, tennis, basketball, volleyball, Formula 1 and more.

Rivalo also stands out for having a rich betting line-up to cater to all sports fans. Thus, users of the platform are able to take advantage of a wide variety of bets with excellent odds, including single bets, combined bets, system bets or special bets.

Follow Rivalo on social media and stay on top of promotions and odds for the main games of the round in Brazil and abroad.

Through this portfolio, Footballco reaches over 640 million football fans per month, publishing on the web, apps, email, social media, podcasts, video and more.

Footballco is majority-owned by Integrated Media Company (IMC), an affiliate of US private equity giant TPG. The DAZN Group maintains a minority stake.