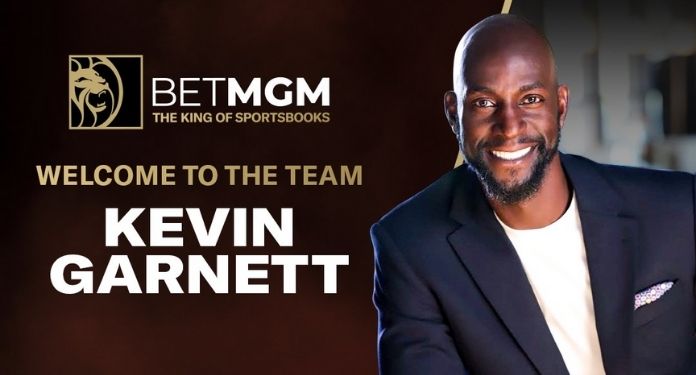 NBA icon Kevin Garnett has joined BetMGM as the latest brand ambassador and will be featured in upcoming US sportsbook company marketing campaigns, promotions, social media content and fan events.

The joint venture between Entain and MGM Resorts will see the 15-time basketball player ‘All-Star’ complete its roster of partnerships with sporting personalities.

Matt Prevost, BetMGM’s Chief Revenue Officer, commented: “Kevin Garnett brings a unique energy to everything he does, on and off the court.”

“As basketball season approaches, we look forward to welcoming Kevin into the BetMGM family and working with him on a variety of fan-focused promotions.”

Since retiring from basketball, Garnett has emerged as an established entrepreneur, having created the gaming and content platform, Gaming Society, with Players’ Tribune co-founder Jaymee Messler.

During his 21-season NBA career, the Hall of Fame forward played for the Minnesota Timberwolves, Boston Celtics and Brooklyn Nets, being named 2004’s Most Valuable Player and earning 2008 Defensive Player of the Year honors.

He also appeared in the Oscar-nominated film ‘Uncut Gems’ in 2019, which has a big focus on the game, and is slated to appear in the new documentary, ‘Anything is Possible’, set to premiere on Showtime on November 12th.

Despite not being a regular sports betting practitioner during his NBA career, Garnett is now passionate about making betting more accessible to all sports fans and athletes.

Despite not being a regular sports betting practitioner during his NBA career, Garnett is now passionate about making betting more accessible to all sports fans and athletes.