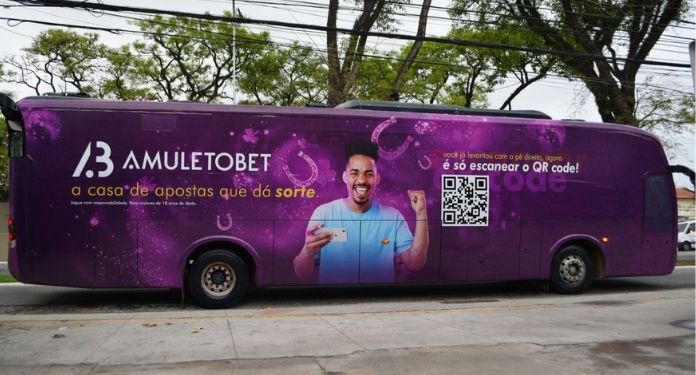 The sports betting platform and online casino, AmuletoBet recently arrived in Brazil and is investing in several actions, both to increase the visibility of its brand, as well as to reach a growing public.

Now, the bookmaker is promoting a differentiated action to increase its exposure in the main city in the country. The company’s brand will circulate in São Paulo on a fully enveloped advertising bus. This activation, which began on September 4th, is expected to extend until October 4th.

AmuletoBet’s bus route is as follows: Av. Paulista, Av. Rebouças, Av. Vinte e Três de Maio, Ibirapuera Park, Vila Mariana and Higienópolis. The vehicle will be circulating around São Paulo with an invitation for players to get to know the platform.

“AmuletoBet, the lucky bookmaker. You’ve already got up on the right foot, now just scan the QR Code”, says the message from the bus. The first deposit offers a 100% freebet up to R$300.

The bookmaker arrived with the intention of establishing itself as a reference in the Brazilian market. Therefore, the company is carrying out a series of actions aimed at raising the profile of its brand among local players.

One of the first highlights was the signing of a master sponsorship contract with Atlético Goianiense, a club that is playing in the first division of the Brazilian Championship.

In addition, AmuletoBet acquired advertising boards in the last matches of the Brazilian team in the South American Qualifiers for the 2022 World Cup.

And, last weekend, the group promoted an unprecedented action in the Stock Car Pro Series with the brand’s exposure in a car. The house and driver Rafael Suzuki, who represents Toyota, running for the Full Time Sports team, closed a partnership for the Stock Car Super Stage, in Goiânia.

Remembering that AmuletoBet is part of Sweetspot N.V., a company registered under the laws of Curaçao under registration number 134318(0) and address Fransche Bloemweg 4, Willemstad, Curaçao.