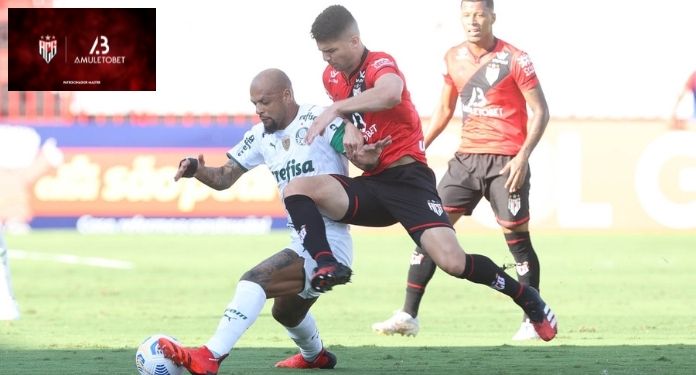 Newly arrived in the Brazilian market, the bookmaker, AmuletoBet, was formally presented as Atlético-GO’s new master sponsor, this Saturday, the 17th.

In addition to inserting the brand into the most valued space for the Dragon’s game and training jerseys, the partnership also includes physical and digital deliveries such as an advertising board in matches with the team’s field command in Brasileirão.

In addition, the sports betting company’s brand will appear on three signs at the Atlético-GO Training Center, in weekly posts on official social media, a banner on the official website, on the Antônio Accioly Stadium screen and on the backdrop in the press room.

“It is with great satisfaction that we welcome AmuletoBet. We are very happy because it is a brand that has shown transparency, seriousness and that wants to be known in Brazil through Atlético-GO. We feel proud and understand that Atlético has a very high visibility. I hope we can add and that we are able to win each other over so that we can make an important renewal at the end of this contract”, declared Adson Batista, president of Atlético Goianiense during the presentation conference.

Batista added: “Athletic is a club that has a plan. We always seek to value our product and Atlético’s shirt is not outdoors. That’s why we look for companies that fulfill their commitments. And within that, we are happy and confident that we will give back to AmuletoBet”.

Thomas Carvalhaes, Regional Director Brazil & LATAM at AmuletoBet, also highlighted the importance of the agreement. “For AmuletoBet it is an immense satisfaction to be able to join forces with the club this season. We believe a lot in the strength of Atlético-GO and a lot in this partnership. And, as the president pointed out, we also expect a renewal so that we have a long partnership.”

Thomas added: “Of course the choice made by AmuletoBet was also very judicious. For us at AmuletoBet, it gives us great satisfaction to know that we are also entering into a partnership that both parties take very seriously. So, for us to see the fan engagement on social media and the colors of the club, everything was very pleasant. We are very happy”.

The debut of the AmuletoBet brand on Atlético-GO shirt took place this Sunday, 18, in a game valid for the Brazilian Championship, against Palmeiras. In addition to Serie A, Dragão will also provide visibility for the betting company in the last 16 of the Copa Brasil, after eliminating Corinthians, Joinville and Galvez in their head-to-head confrontations.

The Amuleto Bet brand belongs to Sweetspot N.V., a company registered under the laws of Curaçao under registration number 134318(0) and address Fransche Bloemweg 4, Willemstad, Curaçao.

Exclusive: Peter Nolte, ‘We were the first to develop a gaming platform in Brazil’