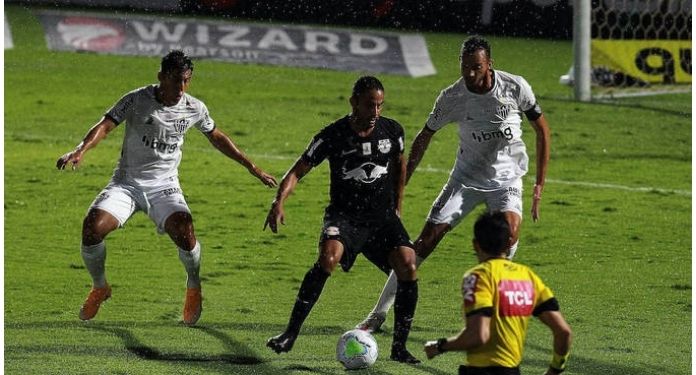 Recently, Atlético-MG presented the Greek bookmaker Betano as a new master sponsor. However, this issue caused a friction with an old partner who stamped his brand in the most valued place on the club’s shirt, the BMG bank. After a few conversations, the Galo board managed to resolve the situation.

At least, the pending issue was resolved for the game played on Monday, 11th, referring to the 29th round of the Brazilian. On the field, the team led by Jorge Sampaoli drew in additions with Red Bull Bragantino, by 2 to 2, without being able to stick to the leaders. However, the bank logo continued in the noblest space of the shirt.

Therefore, the positioning of brands will still be negotiated with all parties. This is because the pending arose after Atlético-MG announced the new sponsor. Shortly after the announcement of the Rooster, BMG issued an official note questioning a likely modification of its brand and reinforcing that it continued as a master sponsor.

“Regarding the announcement made this afternoon (Friday) by Clube Atlético Mineiro, that a new brand will be stamped on the shirt of the main professional football team, Banco Bmg informs that until now, and in accordance with the contract signed in the last negotiations, he maintains his position as master sponsor and continues to discuss new possibilities that are positive for both in relation to the sponsorship quotas for 2021 ”.

With the resolution of the friction with the BMG, the debut of the Betano brand on the Galo shirt, which would take place in this Monday’s match, was temporarily postponed. Before the ball rolled, the club issued an official statement:

“Clube Atlético Mineiro informs that the BMG brand, the current master sponsor of the club, will be the one stamped on the team’s shirt in the game this Monday (11), against Bragantino, for the Brazilian Championship.

The Club confirms deals with the Greek company Betano and also with BMG, in order to envision new possibilities of sponsorship, which will be absolutely positive for all and which, as soon as they are confirmed, will be announced to the market. Such understandings are only possible thanks to the collaborative spirit and the detachment of our current master sponsor, BMG.

The eventual change will contribute to the aggrandizement of the club and its partner brands, within the project of transforming the Rooster into a reference in football for Latin America ”.

Betano is a Greek company that started operating in the online betting sector in 2013 and operates in seven countries, with more than 300 thousand customers registered on its platform. In 2019, the company decided to enter the sport to achieve more repercussions.

The first attempt was in a touring car modality, the GT4 South European Series. Subsequently, the company entered Portuguese football and invested in Braga and Marítimo.

Betano also has a second brand, Stoiximan, which also maintained business with football teams, supporting PAOK, OFI Crete and Olympiacos, all from Greece, Apollon Limassol, from Cyprus and FC Craiova University, from Romania.

FeedConstruct will have data and video coverage of the Argentine Beach Volleyball Circuit, FeVA

Betcris confirms participation in the next Gaming Americas Meetup