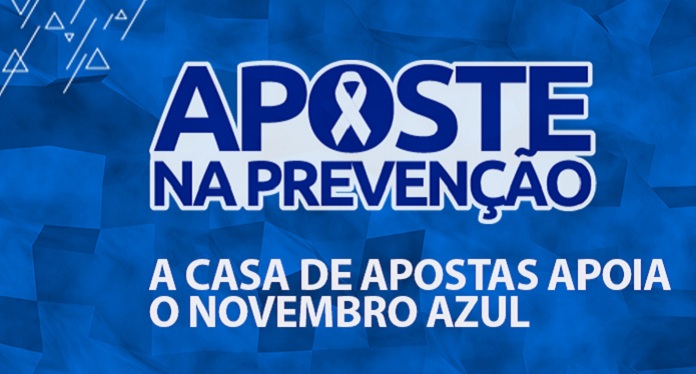 The first activation of the betting company is scheduled for this Sunday, 8, in a round of the Brazilian Championship, in the clashes involving Bahia and Botafogo and Bragantino and Santos for Serie A, as well as Sampaio Corrêa and Vitória for Serie B.

The mention of Blue November will occur both in social networks and in the uniforms of supported clubs. “We believe in the strength of sport and football to be a great vector for information and changing people’s behavior”, stressed Hans Schleier, the marketing director at Casa de Apostas.

Schleier added: “When we carry out actions that deal with topics of great relevance and reach, taking care of people, we are working on the brands involved and positioning the Casa de Apostas closer to society”.

In addition, the Casa de Apostas will publish a series of videos on the social media of the sponsored teams, detailing stories of men who were able to overcome the disease, relating to some character linked to the club, such as players, former players, professionals or former employees .

The purpose of the action, which will continue until the end of the month, is to reinforce that this disease can affect anyone, and that with prevention, early examination, monitoring and medical treatment, there is a great probability of full cure.

In addition to the Casa de Apostas and its partner teams, another entity involved in this campaign is Instituto Lado a Lado Pela Vida, which has been dedicated for more than a decade to passing on health information and making people aware of the need to change habits seeking a healthier lifestyle.

Champions League final: know how and where to bet

Suspicion of fraud in qualifying match of the Roland Garros Tournament