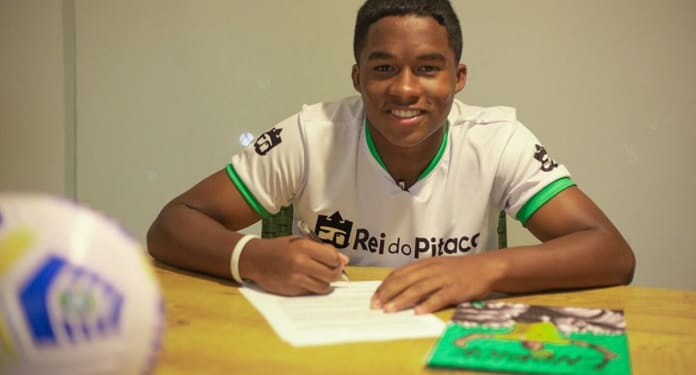 The player Endrick, from Sociedade Esportiva Palmeiras, is the new ambassador of the Rei do Pitaco. The brand of the biggest daily fantasy game in Latin America becomes the sponsor of the athlete until 2025. The partnership is signed in the same month of the signing of his first professional contract with the club alviverde, which will allow his squad, by coach Abel Ferreira, to join the team’s main roster.

Endrick’s contract with Rei do Pitaco was negotiated by Wolff Sports, the exclusive sports marketing agency for managing the player’s sponsorship contracts. It provides for the athlete’s presence in events, advertising campaigns, as well as in customized sportstech actions.

“Rei do Pitaco is the largest daily fantasy game platform and we only form partnerships with those who believe in the potential to grab our brand and understand our purpose of bringing good experiences to football fans. Endrick has the DNA of sportstech with its great achievements in such a short time, as well as our platform, which was created in 2019 and is already a leader in the segment. We believe that our new ambassador will provide great results and emotions with the ball on the foot and the Rei do Pitaco app on hand”, highlights Mateus Dantas, CEO and co-founder of Rei do Pitaco.

Rei do Pitaco is the second brand to sponsor Endrick and support him in his process of evolution as an athlete. In a contract also negotiated by Wolff Sports, earlier this year, the player became an ambassador for OdontoCompany, the largest network of dental clinics in the world.

“Last February, Endrick broke a record, signed the earliest sponsorship contract in Brazilian football ever. After just five months, we are very happy to be able to make yet another long-term partnership between two phenomena possible: Endrick and Rei do Pitaco. I am fully convinced that it will be a partnership full of many goals scored”, says Fábio Wolff, managing partner of Wolff Sports.

For over a year Endrick has been attracting a lot of media attention not only from Brazil but from all over the world. Last January, he was the highlight of Palmeiras’ unprecedented title in the São Paulo Junior Football Cup, also winning the individual award for Best Player of the competition. The feat resulted in articles and covers in the main Brazilian and European sports dailies, reporting the interest of major international clubs in him.

A few days after the Copinha, the athlete was named by the main football magazine in the world, the English “FourFourTwo”, in the top 10 of the list of the 50 main promises of world football. And the success was reflected not only in the world sports press, but also in Endrick’s social networks. Before the beginning of Copinha, the athlete had 75 thousand followers on his Instagram account. Today, that number exceeds 1 million.

In April, Endrick was elected the Best Player of the Montaigu Tournament, held in France, when he was part of the Brazilian Under-17 Team. Brazil was the champion of the competition, which also featured teams from Portugal, Belgium, Argentina, England, Holland and Mexico. And in addition to being the Best Player, Endrick was the top scorer, with five goals scored.

Rei do Pitaco is a leading daily fantasy game platform through which users build lineups with players from professional football leagues and score according to the statistical performance of these athletes in real-life matches.

Unlike competitors, Rei do Pitaco users compete for prizes at the end of each round. Sportstech was founded in 2019 with the central purpose of bringing more fun and entertainment to the lives of those who love sport.