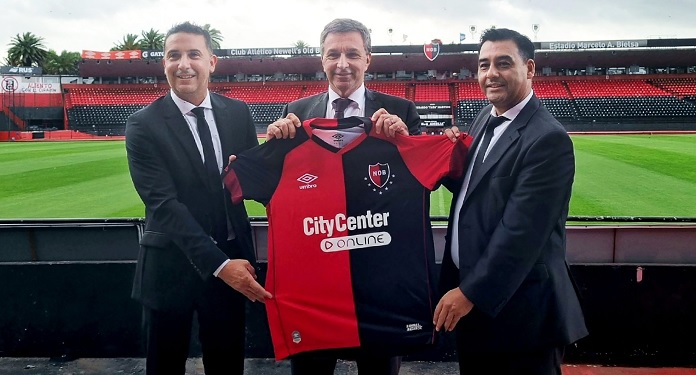 Leaders and directors of the two institutions participated in the event where the agreement was signed, which runs from January to December of next year. “We are happy to sponsor one of the most important clubs in the city and in the country such as Newell’s Old Boys,” said Romina Freijomil, the entertainment group’s Marketing and Communication Director.

Freijomil continued: “Without a doubt it is a very special year for City Center Rosario, which is celebrating 12 years, and for City Center Online, on its first anniversary. Being able to mark the presence of our company in the uniform of this prestigious club fills us with enthusiasm”.

The partnership was signed in the stadium’s presidential box. City Center Rosario was represented by the general manager, Miguel Ángel Baldebenito; the manager of the Online Division, Darío Barrios; the Marketing and Communication Manager, Romina Freijomil; and lawyer Mónica Bianchi.

While the Argentine soccer team’s delegation was made up of the president, Ignacio Astore; Sharon Romero (secretary); Cristian Maderna; Raúl Pallotti; Juan José Bartalini and members of the Board of Directors.

City Center Online is City Center Rosario’s online entertainment platform, offering casino games, live casino, slots and bingo. The intention is to provide the player with a very high quality service, as well as the best online casino games on the planet.

The site also stands out for its security and has the experience of City Center Rosario, a brand that has been present in the entertainment market for over a decade. In addition, the platform offers a gaming experience from any location from a mobile device.