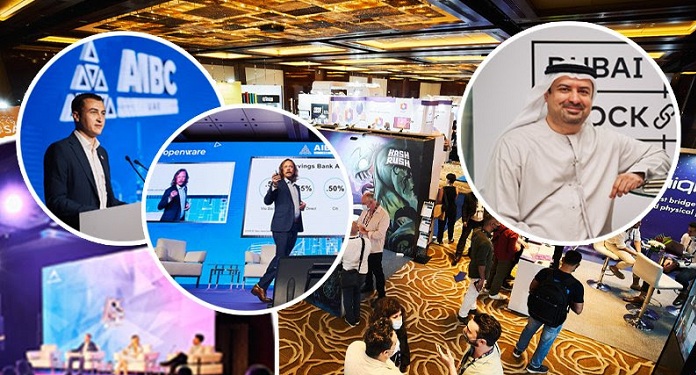 In this list, you will see some of the main highlights of the great AIBC UAE – Dubai event, in the United Arab Emirates.

1. Winner of the AIBC Startup Pitch

For the first time, the ‘Draper-Aladdin AIBC Startup Pitch’ offered a generous prize to a young company looking to gain an edge in the competitive world of business. The prize for best pitch was awarded to PalletPal. This blockchain platform launched the idea of ​​making shipping as easy as booking a flight.

PalletPal is made up of passionate people who are focused on transforming the commerce and logistics environment. This trophy secures funding for the idea as well as resources on the popular “Meet the Drapers” program. The show’s winner usually receives up to half a million dollars from Tim Draper.

AIBC also served as a platform for RoboAds to showcase the world’s first mobile advertising robot displaying NFT artwork as well as live cryptocurrency pricing. Through this innovation, customers had the opportunity to inform themselves and invest in non-fungible tokens.

Equipped with four 55-inch digital signage screens in 4K resolution, the robot walked autonomously around the site. For the first time during the pandemic, this robot allowed retailers to display their products in a digitally evolved environment, reducing the need for physical interaction.

3. Official government support during the event

His Excellency, Dr. Ahmad Belhoul Al Falasi, Minister of State for Entrepreneurship and Small and Medium Enterprises, expressed his gratitude to AIBC for bringing the technology and digital marketing show to the UAE.

Their message of support follows the official welcome letter from the Government of Dubai, where they cited their satisfaction that the AIBC Summit has chosen Dubai as their host city, saying that Dubai was ‘located within one of the safest countries in the world and with connectivity incomparable to every corner of the globe.

Malta’s Minister of Economy, Silvio Schembri, was also present. He highlighted the success that Malta has achieved with the digital economy and its sector, a success that has been attributed to a healthy economy, as well as a framework that allows the best possible use of technology.

Brock Pierce, a former US presidential candidate, gave a speech at the conference, as well as a course on Blockchain and Crypto – emphasizing the benefits of cryptography for humanity, urging entrepreneurs to focus on improving the lives of billions, instead of focusing on making billions of dollars.

His popular educational workshop was designed for newcomers to the industry and sought to educate anyone interested in his ability to improve the world. His workshop was so well received that attendees gathered outside the room for an impromptu press conference, where he continued to answer questions from the audience.

This event welcomed players and investors at the Intercontinental Dubai Festival City and offered future DeFi project partners the exclusive opportunity to engage with the world’s leading investors in a relaxed networking session.

All known faces of the industry were present on the panel, such as: Dr. Irina Heaver who moderated the panel, Prof. Scott Stornetta, Josef Holm, Medha Parlikar, Dr. Marwan Al Zarouni and Jorge Sebastiao. With blockchain technology having far-reaching applications in many industries, the main talking point was about a decentralized future.

This event featured several topics for debate and some of the best minds in the business on stage. Dr. Marwan Al Zarouni, head of the UAE Blockchain Center, welcomed the guests during their participation.

He was at the talk: ‘Regulatory Updates in the Middle East Region’ and gave indispensable insights stating that “The UAE and Dubai are always at the forefront of innovation and blockchain and cryptography assets still have huge potential for growth and innovation” .

“We, as Dubai Blockchain Centre, aim to create a fertile environment to foster innovation and educate everyone about the applicable use cases of this revolutionary economic system that is created by blockchain technology.”

7. Magic night of awards at AIBC

As Dubai is one of the biggest blockchain hubs in the world, it was important to reward the most impactful person of the year in the Middle East, with the honor going to Jorge Sebastiao, CEO of Nimbus DeFi and member of the conference panel, developed by DIFX.

The Blockchain Innovation of the Year Award went to the community-driven FreeTon developed by Iritech. Improving the privacy of crpytocurrenices, Nymtech won the ‘Blockchain Solution of the Year’ award.

Educating a wide audience on social media, Tone Vays, developed by Amir Capital, has been named Crypto Influencer of the Year. CoinsLoot, developed by Nimbus, was named NFT platform of the year. Singularity Net developed by VG Pay was the choice for AI App of the Year.

The ‘Exchange of the Year’ was Bitcoin.com, developed by CoinCasso. My Tokenized Capital, powered by CoinsPaid, is the tokenized asset of the year. CoinsPad itself, offered by CUB Ecosystem, was named ‘Payment Provider of the Year’. The number one DeFi project of the year was OVR’s Singularity DAO.

Serial digital entrepreneur Mru Patel and financial journalist Jane King created the world’s first tokenized NFT booth at AIBC in Dubai. The My Tokenized Capital booth was the first booth at an exhibition allowing attendees to convert their interview into an NFT.

This is the first tokenized NFT booth for emerging technologies in the world. Participants were able to discuss their companies and projects in decentralized finance, NFTs, blockchain, AI and other technologies and later transfer these interviews to non-fungible tokens.

During the event, several innovative pieces by established local and international artists showcased the beauty of the crypt and blockchain in the form of artwork, presented both physically and as an NFT.

Established artists who presented their work during the show include Mark Mallia, who is a Maltese artist who works with abstract paintings on a variety of ceramic and mixed media sculptures, artist Derek Mason, cryptography artist – VESA, Anastasia Machikhina and the award-winning multimedia and technology artist Amrita Sethi.

Successful NFT artist Amritha Sethi also investigated the newly emerged use cases and capitalization opportunities during a panel discussion, while Fernando Matinho highlighted the motivations of real artists to create their works.

The chances of NFT art having a beneficial impact on humanity are high potential and the industry will purposely need to find solutions on how to guide NFTs into a meaningful future rather than stealing money.

The premium list of guests attending the event was huge. Independent candidate in the 2020 US presidential election, Brock Pierce joined everyone on stage. He is an entrepreneur and venture capitalist with a broad background in founding, consulting and investing in businesses.

Dr. Marwan Alzarouni, Crypto Pioneer and CEO of Blockchain Center Dubai was also present during the event. Prof. Scott Stornetta, a renowned physicist, scientific researcher and noted figure in cryptographic and computer science was also seen at the site. He was the first person to mention blockchain architecture.

It is worth remembering that interesting conferences, high quality workshops and unique networking opportunities will be part of the AIBC Europe event that will take place in Malta from 16th to 18th November.