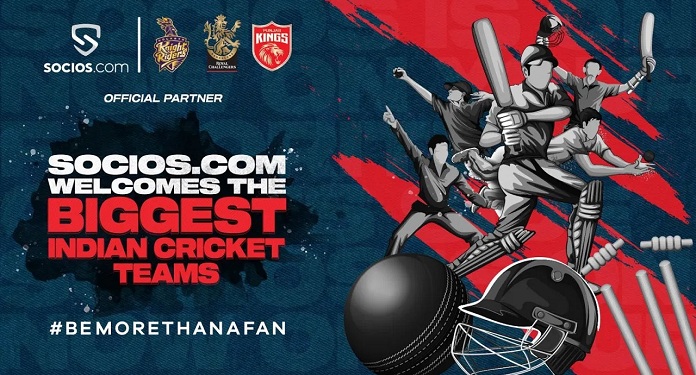 IPL is a Twenty20 cricket league played by eight teams from eight Indian cities with the highest levels of participation in world cricket and a brand value in excess of $ 6.5 billion. The T20 season was suspended last week, with the safety, health and well-being of all stakeholders in mind.

With no games for now, the three teams and Socios.com are now taking the opportunity to explore blockchain and digital initiatives aimed at improving fan engagement. In addition, it is a direct consumer platform (D2C) that leverages blockchain technology to provide sports organizations with the tools to interact and monetize their global fan bases.

Chiliz and Socios plan to expand business in 2021

The announcement brings the number of Socios.com partners to more than 30. The list includes a number of major international sports organizations, such as Barcelona, ​​Paris Saint-Germain, Juventus, AC Milan and Manchester City and the UFC.

Chiliz $ CHZ is a cryptocurrency with a market capitalization of $ 3 billion. The company has big plans for global expansion and will continue to increase its presence in Europe, while expanding its global network with new partnerships in the United States, United Kingdom, Asia and South America.

The company has several offices worldwide and plans to open new headquarters in New York, Madrid and São Paulo in 2021. While Chiliz generated revenues of $ 30 million in 2020 that were shared with partners. However, the target for 2021 is to exceed $ 200 million.

Representatives of IPL clubs celebrate agreement to engage fan base

Menon added: “IPL is among the top leagues in the world today. The partnership with Socios.com is a significant step towards a new way of engaging the fans that will emerge from that ”, Satish Menon, CEO of Punjab Kings.

Venky Mysore, CEO of Kolkata Knight Riders, said: “The suspension of the IPL was a pity, but it was a necessary step to protect the safety of the players. We were looking forward to finding new ways to improve and optimize the way we engage with our fans, and Socios.com seemed like the right choice. ”

Mysore continued: “Socios.com has already proven what a powerful tool it can be for engaging fans with some of the largest sports organizations in the world. The Kolkata Knight Riders is honored to be among the first IPL teams to reach an agreement with them and we are excited to start exploring all possibilities ”.

Regarding the new partnership, Rajesh V Menon, vice president of the Royal Challengers Bangalore, pointed out: “With the tournament interrupted for the time being and the entertainment in the field paralyzed, the RCB has partnered with Socios to bring some involvement off the field for our fans ”.

Alexandre Dreyfus, the CEO of Chiliz and Socios, also spoke: “The suspension of the league was a vital step in the fight against COVID-19 in India, but Royal Challengers Bangalore, Punjab Kings and Kolkata Knight Riders see this period of inactivity in the field as an opportunity to start exploring the possibilities that the partnership with Socios.com offers ”.

Dreyfus concluded: “Cricket is the second most popular sport in the world and turning passive fans into active fans is essential for their future. I am very excited about the enormous potential of these partnerships in this huge and vibrant market. ”

The Argentine Football Association became the first national team to close with the Socios platform. The agreement focuses on the development and launch of the Official Fan Token.

From now on, fans who access the Tokens will have the possibility to participate in surveys, unique experiences and to compete for promotions, which will only be aimed at those who own these digital currencies.

As part of this partnership, Socios.com also becomes the “Official Sponsor” of the national women’s and men’s national teams. It will be a long-term contract and in a short time the Selection Tokens will be officially launched.

Claudio Tapia, President of AFA, highlighted: “It is with great satisfaction that we announce this important agreement with a multinational and innovative brand like Socios.com. Through the official Tokens, fans will be closer to our selection and will be able to win prizes and exclusive experiences “.

Gustavo Guimarães, from SECAP, says that 2022 will be ‘a favorable time for regulation’