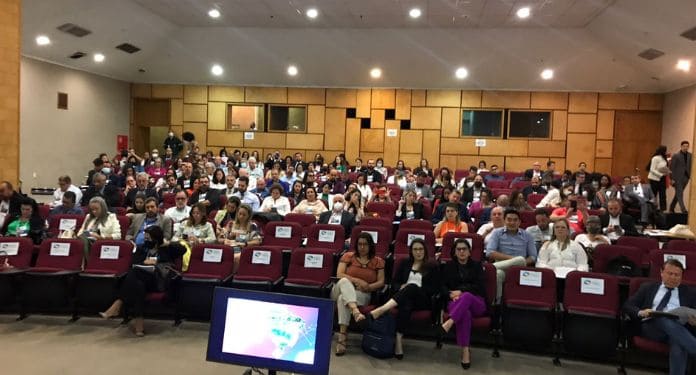 In this First Meeting of Tourism Regional Offices from all over Brazil held today, the president of IDT Cema, Bruno Omori, and colleagues from the sector debated and lectured at the First National Seminar of the PRT (Tourism Regionalization Policy) Integrated by the Ministry of Tourism. The theme was Sport Integrated with Tourism and Games and Casinos enhancing Brazil’s macroeconomy.

The panel was coordinated by Heitor Kadri (National Secretary of Investments of the Mtur), with explanations by Anderson Catozzo (Director of the Secretary of Sport of SP), and also with the participation of Samuel Dourado and José Andrade (Directors of ABRIESP), in addition to state and municipal secretaries from all over Brazil.

The objective of the seminar is to discuss national tourism and its regionalization.

Bruno Omori was the guest of the first panel, along with the National Secretary for Investment Attraction, Partnerships and Concessions, Heitor Kadri, to talk about the topic of Tourism and Sports and the influence of 442, influencing the issue of games and casinos to bring and potentialize tourist destinations in Brazil.

He also spoke about the issue of the 12% earmarked for Tourism as a result of concessions arising from taxes that will come in the future, as well as the 10% that will remain for Sport, in addition to enhancing regionalization by creating new flows.

According to Omori, the Tourism and Sports sector is anxiously awaiting the vote and approval in the Senate of 442/91, which will generate an impact of USD 70 billion on the Brazilian macroeconomy.