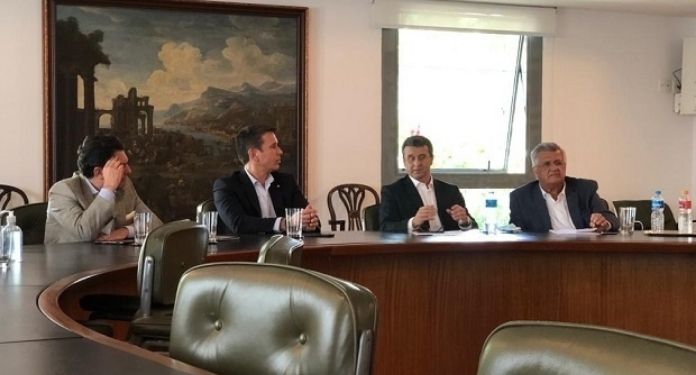 Rio de Janeiro, a city known for its great tourist potential, promoted a meeting between the presidents of the country’s jockey clubs, the GT members of the Regulatory Framework for Gambling, deputy Bacelar (Podemos/BA) who is the coordinator of the group and chairman of the Committee on Tourism; Felipe Carreras (PSB/PE) and Otavio Leite (PSDB/RJ), as well as representatives of tourism entities. The meeting took place at the headquarters of the Jockey Club Brasileiro (JCB) last Friday (15th).

On the agenda, the inclusion of bingos and gambling machines in racecourses. The goal is to increase revenue and revitalize the country’s tourism entities.

Deputy Bacelar noted the importance of the meeting, presented the processing of PL 442/91 in the Chamber of Deputies and defended that turf be included in the revision of the text of the proposal.

“I will suggest to the rapporteur, Deputy Felipe Carreras, that the premises already approved in the replacement of PL 442/91 be maintained in relation to the issues of jockey clubs, which allows the installation of a bingo in the installations of racecourses, video-bingos machines and slots and virtual races,” he suggested.

According to the president of the JCB, Raul Lima Neto, the main racecourses in Brazil are facing economic difficulties and cannot survive only by betting on the races, which is why they need to be included in the process of legalizing gambling.

Neto mentioned the Hipódromo de Maroñas, in Montevideo, Uruguay, which was closed for six years and was reopened after the approval of a new turf law, which allowed the jockey to operate gambling rooms with slot machines.

He also commented on the revitalization of the Hipódromo de Palermo in Buenos Aires, Argentina, which operates a gambling room with more than 5,000 slot machines and electronic casino games.

“We have 16 main Brazilian racecourses and we can be part of the history of the recovery of national turf and tourism. We can enhance the scenario as done in Maroñas and Palermo, which have transformed their facilities into great entertainment centers.”

“We understand that there are no more likely places like the racecourses to be involved in this activity. When gambling are legalized, jockey clubs can participate through betting on recorded races and the installation of slot machines in racecourses in the country”, he suggested.

The importance of changes in jockey clubs

Horse bets generate 3 million jobs, of which 600,000 are direct. That is what José Carlos Lodi Fragoso Pires, director of the Jockey Club of São Paulo, stated. He also defended the implementation of the ‘racinos’ model (racing + casinos), already used in the United States.

Deputy Otávio Leite commented that the climate for the legalization of gambling is much more mature in society and in parliament.

“The legalization of gambling can be an opportunity to boost tourist activity. If Brazil had to try the game somewhere, it could do it at the racecourses. I think sports betting without compensation for the State is absurd. The issue is in good hands with the deputies Bacelar and Felipe Carreras and I will be with them defending the jockey clubs”, he promised.

Difficulties for the approval of the Regulatory Framework for Gambling

The rapporteur of the GT of Gambling, deputy Felipe Carreras, commented on the challenges of approving the matter because of prejudice and controversy.

“Unfortunately, for part of society the game is still linked to crime, but we know these versions and we know what we have to do. We have already been with the Federal Police and the Attorney General’s Office. We are beginning to understand that the resistance is due to prejudice and we are building a favorable environment for the approval of gambling”, he suggested.

Carreras also commented on the importance of the support of representatives of jockey clubs for the approval of the bill that legalizes gambling in the country.

“We need your support to mobilize parliamentarians to approve the proposal. Regarding the racecourses, I look forward to inserting the proposals of jockey clubs. We have to try to converge interests to pass the bill in the Chamber. We understand the healthiest model for tourism entities in order to move forward. Count on me,” he said.