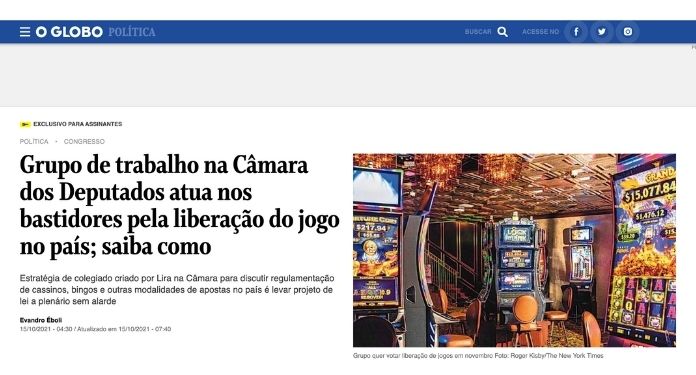 The working group (GT) created by the president of the Chamber, Arthur Lira (PP-AL) is evaluating a project that authorizes the resumption of casinos, bingos and other types of games in Brazil. The text discussed is from 1991 and establishes the Regulatory Framework for Games in the country.

In an article published this Friday, 15, the newspaper ‘O Globo’ presents the strategy discussed in the working group of the Chamber. According to the report, the intention is to put the project to a vote in the plenary in November, but without much fanfare.

In addition, the group is planning to hold a minimum number of public hearings, including one with the Internal Revenue Service and the Council for the Control of Financial Activities (Coaf). Supporters of the games argue that legalization will help the economy to recover and boost national tourism.

Check out all the details in the ‘O Globo’ article:

Working group in the Chamber of Deputies acts behind the scenes for the release of the game in the country; know how

In conversations, meetings and closed meetings, a group of deputies outlines the strategy to pass in the Chamber a proposal that allows the reopening of casinos, the legalization of bingos and other modalities such as animal game, slot machines and online games . The action includes guiding the project in the plenary already for November, without fanfare.

It is also in the plans of the parliamentarians to promote a minimum number of public hearings, one of them involving the Federal Revenue and the Council for the Control of Financial Activities (Coaf). The tactic is not to give much space to sectors that oppose the plan, but to break the resistance with the argument that the matter will proceed within the limits of the law.

The proposal debated by the working group (GT) created by the president of the Chamber, Arthur Lira (PP-AL), dates from 1991 and creates the Regulatory Framework for the Games. In the meetings, the deputies evaluate how to convince the evangelical caucus and left wings, against the games, to at least not work against the proposal.

President of the WG and of the Chamber’s Tourism Committee, deputy Bacelar (Podemos-BA) has told colleagues that he and deputy Vermelho (PSD-PR) convinced Lira to create the collegiate and count on the support of the head of the House, who would have asked for discretion. TO GLOBO, Bacelar claims not to know Lira’s position, but said he hoped to have his support:

— We went to the president (Lira) and we said that we have a 2016 project ready to vote. And he took over and told us, ‘Come on, let’s face it. But let them work without much of a spotlight, without much public hearing, and I embrace the issue’ — reported Bacelar in a closed meeting with allies.

Lobbyists who have been working for years in the Chamber for the release of games also participate in GT meetings, under the seal of consultants. One of them is the journalist Magnho José, who presides over the Instituto Brasil Jogo Legal and edits a portal on the subject. On his social networks, he published last week a photo of one of these meetings, which he gave details. Magnho José even gives tips to parliamentarians about how casinos work in the world and online games.

The group already articulates a reaction to the statement by President Jair Bolsonaro to the magazine Veja, that it will veto the legalization of games, if Congress approves it. The most governing member of the WG, deputy Bibo Nunes (PSL-RS), said he was surprised by the president’s position:

— The legalization of games will boost tourism, generate foreign exchange and thousands of jobs. This position of the president today is pressure from the evangelical bench, but he will change.

GT deputies believe they have the support of more than half of the 513 deputies. They say that most evangelicals support the legalization of gambling, but that they prefer not to publicly position themselves. And if Bolsonaro insists on the veto, they will work to overthrow him.

— The president’s statement, using reverse arguments, is totally wrong. Whoever loses the most with gambling in illegality is the State, which fails to collect billions – pointed out Bacelar. “The president does this to please his religious base, but he has to think about employment. If you veto, we’ll take it down. Be sure.

The participation of the Revenue and Coaf in one of the public hearings aims to dissociate the activity of games from crime, as one of the members of the group stated, in a closed meeting:

“Let’s call them to show that it’s going legal. And (listening to them) will break the discourse of those who are against casino opening associating the activity with money laundering.

The deputies want to implement in the country the “resort casinos”, large complexes with hotels, shops and gaming venues. By the accounts of this group, to build a space like this, the investment is in the billions of reais.

The members of the GT believe that they have an ally in the Chief of Staff, Ciro Nogueira. The senator, who is now at the Palácio do Planalto, is the author of a project that legalizes games.

Rapporteur of the project, Deputy Felipe Carreras (PSB-PE) also defends the regulation of the animal game. Like his allies, he usually argues that, if not legalized, the activity will continue to exist throughout Brazil, but being exploited by offenders:

— It is better to be in the light, regulated, than in the dark (in lawlessness).

William Hill to launch new campaign ahead of Premier League