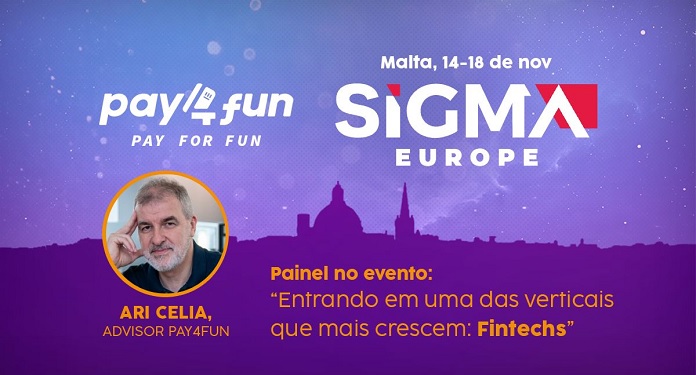 Pay4Fun, a Brazilian financial operations company, will be at SiGMA Europe 2022, an event of great notoriety in the global gaming industry. The convention takes place between the 15th and 18th of November in Malta, a place that is a reference in the sector.

Pay4Fun executive, Ari Celia, will be on a panel at Sigma Europe 2022, on November 17 at 2 pm, on the theme: “Entering one of the fastest growing verticals: Fintechs”. The debate will also be attended by Tejinder Kumar, CCO of Finixio and Paula Zuloné, head of accounts at Connect Pay.

With industry titans, thought leaders, pioneering business executives and seasoned technology professionals, SiGMA has become an internationally recognized center for business development and innovation. Its events have been a reference in setting the agenda for the future of the gaming industry.

Pay4Fun will present its payment solutions for the Brazilian market at SiGMA Europe 2022, which have all the security and technology, allowing merchants from all over the world to do business with the Brazilian public.

Chat with Pay4Fun at Sigma Europe 2022

Pay4Fun is the first financial transaction company in the entertainment niche to be authorized by the Central Bank of Brazil. By integrating Pay4Fun with their e-commerces, commercial partners are sure to have a solid and recognized company in the market.

The Pay4Fun financial transaction platform allows you to make deposits, payments and transfers in a practical, fast and secure way. The company was founded in Brazil and has business partners from all over the world.

Facilitating the day to day of consumers and merchants, through a simple and intuitive platform, Pay4Fun, promotes a differentiated service at all levels. A crucial point that differentiates Pay4Fun from other fintechs is its service. No interaction with customers is done by robots.

For merchants, Pay4Fun’s service is also top-notch. Companies around the world have full support, both in implementation and throughout the partnership.