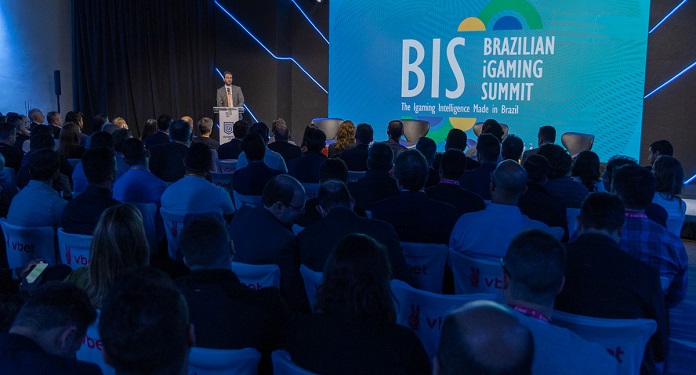 The second edition of the Brazilian iGaming Summit (BiS 2022) – The Brazilian iGaming Intelligence started this Tuesday, 28, at Espaço Boulevard JK, in São Paulo (SP). The biggest sports betting meeting in Brazil is bringing together the iGaming industry, lotteries and affiliates for a unique and unmissable event.

The chance to meet, reconnect with partners and meet new faces in a 100% face-to-face environment in Brazil makes BiS 2022 one of the highlights of the annual calendar of world fairs. The first activity of this opening day was the reception, accreditation and start of visitation to the space destined to the exhibition of brands, products and services.

With high quality lectures and panels, BiS 2022 arrives to provide updated, relevant and extremely useful content to help design the future of the national market for lotteries, games and sports betting.

The event started with Alessandro Valente, (founding partner of Super Afiliados) thanking everyone present and praising BiS 2022 as the biggest iGaming event in Brazil. “BiS is already the most important event in the sector in Brazil. It is an honor to share this space with important figures from the political and iGaming scene”.

Valente highlighted the holding of the first edition of Afiliados Latam, essential for anyone who wants to do business and network. In addition, he made a point of thanking the efforts of the CEO of the iGaming Brazil portal, Flávio Figueiredo, and the entire team for supporting the event with a high level of service in the coverage and preparation of content and interviews.

“All this is thanks to the support of each one of you, from those who are congressmen to those who are sponsoring the event”, concluded Valente.

Opening lecture: The importance of sports betting regulation for the government

The first lecture of BiS 2022 was given by Geanluca Lorenzon (Secretary of Advocacy for Competition and Competitiveness – SEAE – Ministry of Economy). “I would like to thank the entire team and all the creators for the event. Due to the current moment, where the decree or regulation of betting has not yet been released, we are here in a very tight limit on what we can talk about rules and regulatory issues ”.

Lorenzon stressed that this is a decisive moment for Brazil. “The role of regulation is not control, it is to support the market in general and help companies in the sector. The presidential decree that we are awaiting, which should give general guidelines to regulate the market, is a political choice, considering all the areas involved. “.

The speaker also pointed out some principles that SEAE, as a regulatory body, will adopt in Brazil. “The decree is defined by the political area, we, as regulators, have to follow international criteria to do so”, listing predictability (transparency), responsive regulation and issues related to benchmarks.

Still in relation to SEAE, Geanluca Lorenzon highlighted the body’s concern to ensure fair competition for all market players. Therefore, the agency is preparing to deliver a more targeted timeline to companies awaiting regulation, as soon as it becomes available.

“We know the importance of regulation for this sector and we don’t want this scenario to suffer like other regulated areas in Brazil. Our concern is to respect those who come to be part of the market in a legal way, guaranteeing the legal certainty that the law allows”, he added.

Panel: The legal aspects of the regulation of sports betting and lotteries in Brazil

Luiz Felipe Maia and Witoldo Hendrich opened the debate by exposing the actions that were taken in the last four years, a valid deadline for finalizing the regulation of the sector. “It has been done for 4 years, actions for the regulation to happen”, said Maia.

Roberto Brasil Fernandes spoke about the differences between lottery and gambling. “Lottery is a public business, gambling is carried out by the private sector. While the lottery is a business in which the public interest must be served, and sports betting also fits into that. in the lotteries of Brazil”.

While Marcello M. Corrêa focused on aspects of the political-administrative organization of lotteries and bets at state and municipal levels. “It is necessary to carry out a validity control, verifying in the law, on the autonomy of the states regarding the creation of lotteries”.

For Corrêa, the challenge is to have rules from the Federal Union and the States. “With limits, it is necessary to align the Union’s rules with those of the States, since each region has its reality”.

Fernandes added: “Brazil is already a reality in this sense, we already have some federal lotteries, with published decrees and some questions basically aligned. But despite this, the states do not have a blank check”.

The panel moderator addressed the territorial issue of state lotteries. When clarifying the point, Fernandes mentioned that the state lottery can sell tickets in their respective state. In addition, Corrêa recalled that this practice occurs and has already occurred in Rio de Janeiro, and there are measures in place to guarantee the security of the state lottery.

For the players who are monitoring the Brazilian scenario, Maia considered that it is necessary to pay attention to issues of brand and website domain, tax rules and properly study the local market.

Marcello M. Corrêa (lawyer and consultant for the Gaming and Lotteries Sector) returned to the stage of BiS 2022 to moderate the debate with Jaques F. Reolon (lawyer and economist at Jacoby & Reolon), Jhonatas Mendes Silva (Lottery director of Maranhão Partnerships ) and Ronan Moreira (general director of Lottery of Minas Gerais).

Jhonatas Mendes Silva told the experience of the state of Maranhão, which has already explored a lottery and “now, we are working on a restructuring of the same state lottery”. competition.

“The purpose of the Maranhão state lottery is to make the lottery work. We want an effective, functional lottery that results in more revenue for Maranhão. The state lottery must remain competitive with the federal lottery,” he said.

Ronan Moreira, on the other hand, noted that private manifestations about state lotteries, which contribute to market research rich in content and important studies. Citing the example of Maranhão, Moreira revealed that the expectation “is that the Minas Gerais lottery, as soon as the study stage is completed, that the decree will be published as soon as possible”.

Lawyer and economist Jaques F. Reolon pointed out that the Expression of Interest Procedure (PMI) allows private companies to provide fundamental studies and content for a sector or launch.

According to Reolon, states and municipalities are learning a lot from PMIs. ”Concession bidding to create a lottery is an extremely complex procedure. It is not enough to just follow a contract, one must find the best model, study financial issues”.

He added: “This is a process accompanied by a Court of Auditors, to assist with all aspects of inspection and definition of companies for the concession”.

Panel: Good practices and expectations of Lottery Operations in Brazil

Márcio Borges Malta presented SorteOnline’s way of working and the objectives of creating a decentralized and non-profit association focused on the lottery area. And, he also presented data on the lottery market in the country and the long-term potential of the modality. “Brazil still has a low revenue compared to other countries around the world”.

But, he recognized that the country is a reference in numerous sectors. “Brazil is a reference in several other segments, so we will be able to reach a higher level of collection and we must work for the regulation and decentralization to happen”.

Roberto Brasil Fernandes asked Otávio Cunha about expectations for the beginning of the Rio de Janeiro Lottery operators at this new moment. “We listened to the market, the wishes of large partners and we have very positive expectations of a very promising future”, projected Cunha.

According to Fernandes, the citizen always wins the lottery. “Society realizes how important the state lottery is. Citizens always win, whether with the prize or with the benefits of lottery resources”, he clarified.

However, the president of Loterj stated that the approximation of state lotteries with Caixa Loterias is of vital importance for the growth and consolidation of the market.

Alexandre Tauszig took advantage of the space to present the way Skilrock Technologies operates, adding that the group is bringing its international experience to the Brazilian market. “The lottery has a social purpose. The lottery returns something to society.”

For Tauszig, “the regulation of a state lottery must have a technology and a platform that meets the appropriate regulations for the market and its peculiarities”, complementing that the lotteries in Brazil must focus on the game of quality, innovation and be based on what is being being done best on the international stage.