Início Event Coverage Waldir Eustáquio Marques: “I hope that the regulation will not go past... 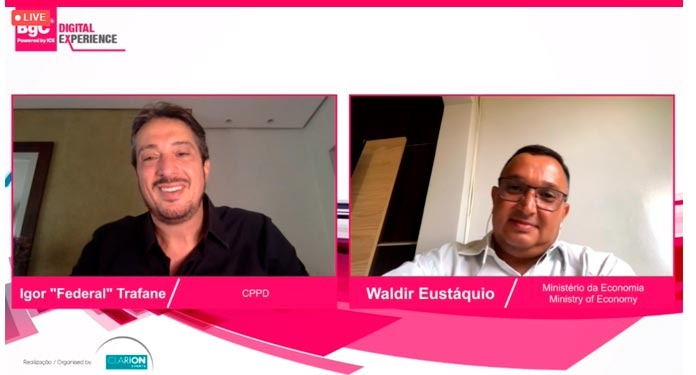 This Tuesday, 8, the Brazilian Gaming Congress (BgC) started by debating the Brazilian iGaming market with a panel focused on the betting regulation process in the country.

In an online format, the opening conversation featured Igor “Federal” Trafane (President of the Panamerican Confederation of Sports Poker (CPPD) and Waldir Eustáquio Marques Junior (Undersecretary of Prizes and Draws of the Ministry of Economy).

Initially, the moderator of the debate asked for more details on how the National Bank for Economic and Social Development (BNDES) and the Secretariat of Evaluation, Planning, Energy and Lottery (Secap) of the Ministry of Economy are working together.

“As you are following, we have been working for a long time and doing the best for the government and the sector. It is hard and complex work. This activity began with the departure of the legislation. From the beginning, we worked to regulate precisely and clearly and we were in a form of approval ”, said Waldir Eustáquio Marques Junior.

He continued: “listening to the market, we understand that we should do it as a form of concession. Therefore, we also chose to include it in the government’s concession process to speed up the process. We set up a work group with three parts: SECAP, BNDES and PPI (Investment Partnership Program) ”.

According to the member of the Ministry of Labor, there are weekly meetings with specific meetings on the subject. “When the process starts, through the BNDES, a contract with the Federal Government must be signed. I believe that by the end of the year we will have the green light so that the BNDES can contact the major players to identify the main service providers. services that will subsidize us with studies ”.

“BNDES consultants who will be hired will also evaluate the possibility of resuming with the approval model. This is because we want to take the most transparent measure to offer security to both the market and the player ”, commented Marques Junior.

Regarding the subject, Trafane questioned what are the main differences between the two regulatory models currently evaluated by the government.

“Authorization is a precarious act, it is enough to fulfill some requirements of the public power that the company will have a right to operate the activity. The concession offers greater security and a contract between the company and the government with specific rules. In my view, the concession is something more solid for companies that come to operate with very high values ​​in Brazil ”, explained the undersecretary.

Regarding the number of licenses that can be offered in Brazil, Waldir Marques revealed that “studies will be carried out by BNDES to base our decision. The numbers and facts will tell us how many licenses will fit in the country ”.

“When you comment on this technical concept, you have the perception that the government’s intention is to continue this element. In addition, it is a great point to evaluate concession and authorization with technical critics and the political issue to follow this”, commented Igor Trafane, who also reinforced the importance of undersecretary Waldir Eustáquio due to his technical knowledge and understanding of the market.

Deadline for betting regulations in Brazil

The panel also addressed a deadline for the end of the betting regulation process in Brazil, since teams and stadiums are already receiving investments from companies and marketing actions in the sector can already be seen in various parts of Brazil.

“But, the government still does not collect and jobs are not yet generated. It is obvious that it is still a process, but large investments have not yet started and there is no legal certainty for large companies to set up,” said Trafane.

“This is the question of the million. Our aim is: job creation, revenue generation. This activity is neither trivial nor simple to be regulated, because it requires in-depth knowledge on some pillars, such as sport integrity, prevention of money laundering. money, responsible gambling. This needs to be taken seriously and the technicians need to be on the inside to have control and charge the sector. This takes a while “, pondered Marques Junior.

He acknowledged that one of the points charged to BNDES is a deadline to offer the market. “I know the expectation is high, the market is charging. We are making it possible to talk to the market. Unfortunately, the pandemic and the technicians had to leave their work environment, and it slowed the process down a bit. Now, we accelerate again. Talking about deadlines is complicated. One of the points we ask BNDES for is a schedule. We need this to show the market ”.

However, the BgC panel participant did not refrain from giving a more precise answer. “I ask for patience, but we are working to have that date soon. I have for me that by July of next year, this regulation needs to be ready, regardless of the direction we take ”, he declared.

The forecast for the national market to enter into force until the second half of 2021 was celebrated by Trafane. “This is great news for the market. There are two years for regulation and two more years that can be extended only once. If the government does not create on time, this generates a right to operate, it means that the government needs to act within that time. Then you bring the term that the government works with in the middle of the next year in an organized way animates the market. And, I am happy to be the bearer of the question that brought this information to the market ”.

In addition, the panel also addressed the scope of the term “game” in Brazil which can be used for “football game, tennis game, video game, as well as being used to play bingo, play in the casino, etc. What does the government intend to do to provide legal certainty in the face of this wide variety of games, from board games to games of chance? ”Asked Trafane.

The member of the Ministry of Economy stressed that SECAP has the competence to talk about what is legalized. “Lotteries and now sports betting. We have the competence to speak what the law allows us to do. The STF decision cannot be interpreted as a blank card for other types of gambling, other than lotteries. The legal security we seek is for lottery operations, making it clear so that it does not mix with other modalities ”, concluded Waldir Eustáquio Marques.