Início Event Coverage Regulation of Sports Betting, eSports and Lotteries were themes of the BgC... 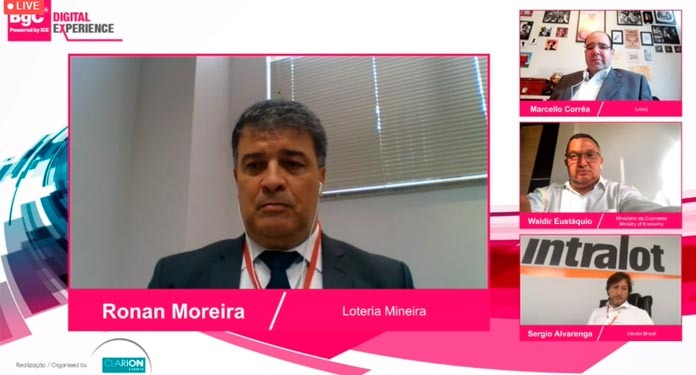 After starting with an update panel on the betting regulation process in Brazil, the first day of the Brazilian Gaming Congress continued with more debates this Tuesday, 8.

The BgC Digital Experience brought in experts and members of the government to discuss new betting modalities and what to expect from the Supreme Court (STF) resolution with the release of state lotteries.

Panel: State lotteries: How will the new scenario be?

Marcello Corrêa (Loterj) moderated the panel “State Lotteries: How will the new scenario be?” The event emphasized the subject of lotteries and the unanimous decision of the 30th of the STF that ensured the states the possibility of exploring the lotteries.

The conversation was attended by Waldir Eustáquio Marques Junior (Subsecretary for Prizes and Raffles of the Ministry of Economy), Sergio Alvarenga (CEO of Intralot) and Ronan Moreira (General Director of Loteria Mineira).

Ronan started by explaining the social role of lotteries. “The purpose of the Minas Gerais state lottery is to generate resources and allocate them to the commotion of social welfare in projects managed by the state government”.

Ronan also commented on the help of lottery resources in the battle against the pandemic: “Lottery resources have already been applied to the construction of hospitals, soccer stadiums, social programs and it is important to note that the lottery has allocated 33 million reais to combat the pandemic in the State of MG. It was a source of pride for us ”.

The director of the Minas Gerais lottery emphasized the importance of competition for the states: “The Supreme Court’s decision brings a healthy competition environment. And I leave the state lottery of MG to help all the Federation units that I need ”.

Sergio Alvarenga, CEO of Intralot Brasil began his explanation by talking about his company’s portfolio: “The games we have in our portfolio require studies to define their priorities by state due to different characteristics in the country.”

Continuing on the subject of modalities, Sergio made comparisons: “We know the most important modalities in the world, and in Brazil it is no different. We have Keno in Minas Gerais, traditional, old, attracts gamblers and we have other possibilities like Toto, but we also have to wait for the judgment and we know the vote of Minister Gilmar and we have an idea of ​​the breadth and openness of other modalities that the union opened the possibility and we are attentive to explore them too ”.

The subject returned to Waldir Eustáquio, who commented on the specific studies that lead them to make decisions: “Some important points are the‘ valuation ’of the operation and its economic and financial framework, as well as the legal framework. I make a very big warning about the legal framework, since it is important for everyone involved to analyze the judgment of the STF decision ”.

In addition, Waldir explained about the possibility of lottery chains to sell products and this will be analyzed further in the near future. “States should analyze, from the publication of the judgment, the payout, to sell the lottery, there is an important tripod. The payout should be attractive, the more points of sale the better and the advertising. Having this tripod very secure, the business will be more successful, ”said Waldir Marques.

The last round of conversation on Tuesday focused on the theme: “Far Beyond Football: the new betting modalities”, also encompassing eSports, Virtual Gaming and other face-to-face and online verticals from iGaming.

The moderation was due to Angelo Alberoni (Country Manager of Betmotion in Brazil), which was accompanied by André Akkari (Co-CEO of Furia eSports) and Álvaro Cotta (Marketing Director of the National Basketball League – NBB).

André Akkari started telling his story as a professional poker player back in 2005 until he started to undertake in the eSports sector. “In the last few years, I connected with this market in a project with Ronaldo Fenômeno and later with Furia eSports. Currently, Furia has eight teams and operations in Brazil and the United States, ”he said.

In addition, the organization has a relationship with 14 large and relevant brands in the general market. “We connected to the sports betting issue recently and we need to be very careful. When we talk about eSports for those who are not used to think that they are electronic games, it is not so! You can think about an Olympics and each sport with its own structure. The benefit of having an eSports organization is being connected to all of this ”.

Akkari added: “Each sport has a different age range and preference. The first big difference in betting on eSports is the age group. When we solve this, we need to get into a didactic issue to teach platforms how to deal with these issues. And from there, everything involves passion. The delivery of esports to the betting world is easy due to engagement, but you need to be selective by the age group ”.

Moderator Angelo Alberoni pointed out the relevance of educating before selling his product to the market, as well as presenting his case under construction with the New Basketball Brazil (NBB) this season.

“It is important to have this vision of educating before selling the product. And, we have a case being built with Betmotion and NBB, it is essential to be able to create this engagement and interact with your fan in digital. We had two games sponsored by Betmotion with absurd feedback and very good language. It is a case that is being developed throughout the year and has everything to be a success ”, detailed Alberoni.

The marketing director of the National Basketball League, Álvaro Cotta highlighted the need to focus on two audiences: fans and brands. “If you don’t bring an experience to the fan, your competition will not grow. This perspective helps us to have more flexibility and customization in the construction of platforms to take the brand to talk to fans in order to generate results for our partners ”, he commented.

For years in the national basketball league, Cotta stressed that the differential lies in collective thinking and always looking at the market when designing short, medium and long term strategies.

“The Brazilian league is new compared to other leagues in the world, in a country known as the country of football. And I think we managed to move forward and succeed with the implementation of management more similar to the American and European leagues, more focused on the market to offer interesting results for brands that are with us ”, he concluded.

Exclusive: President of LaLiga, Javier Tebas, assesses the impact of the ban on advertising by bookmakers in Spanish football

Exclusive: Adam Azor talks about Sportradar and its support for eSports