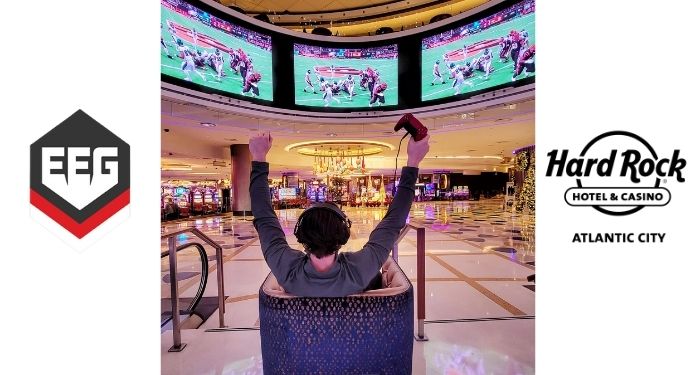 Esports Entertainment Group is partnering with the Hard Rock Hotel & Casino Atlantic City for the first eSports skills-based betting event in the United States, the partnership was announced last Friday.

The newly announced partnership between the two parties will be kicked off by the event to be held in New Jersey on January 22nd and 23rd, 2022. The event will launch LANDuel and is expected to be the springboard for more eSports betting events and permanent facilities at Hard Rock venues, according to a press statement.

The newly announced partnership between the two parties will be kicked off by the event to be held in New Jersey on January 22nd and 23rd, 2022. The event will launch LANDuel and is expected to be the springboard for more eSports betting events and permanent facilities at Hard Rock venues, according to the press statement.

Participants will be able to bet on themselves in each round of the event by checking in and creating a LANDuel account.

LANDuel is a betting platform between players and players, built in Unity, that allows betting based on eSports skills. The consumer-facing LANDuel application enforces stringent four-factor authentication to ensure fair play and identity verification.

“We are extremely excited to partner with one of the world’s leading hotel and casino venues to kick-start the world of regulated peer-to-peer esports betting,” said Grant Johnson, CEO of Esports Entertainment Group.

“This partnership and event is a great achievement for our brand and creates a wealth of opportunities for our groups to explore more innovative events in eSports,” concluded Johnson.

Once assigned to a PC, players will then start playing in tournaments. Within the tournament, competing players will be able to place bets on their own matches as they try to reach the final. Interested participants can now register for the tournament.

“We are extremely proud to offer a unique gaming experience in partnership with EEG,” said Joe Lupo, President of the Hard Rock Hotel & Casino Atlantic City. “We are confident this innovative and highly regulated partnership will be a success, contributing to our industry-leading gaming offerings.”

In addition, the event space will also feature a dedicated set of PCs so that non-tournament participants can compete in side games on LANDuel.

This will allow eligible tournament spectators or casino guests to place a bet on their own non-tournament matches. The event will also include an exhibition stage for the tournament with seating for spectators.

EEG first filed a transactional waiver to launch betting operations in New Jersey in October, including its sports bookmaker VIE.gg. The company considers New Jersey (NJ) to be a highly strategic market, given its monthly sports betting record.

“NJ is unique not only because, as a state, it is widely recognized as the most stringent to obtain a license, making future jurisdictions an easier process, but it also has the geographic advantage of being so close to NYC in the north and Philadelphia in the south. “Gran Johnson told Yogonet in an exclusive interview last month.

“When we go live, we will be the first and only fully regulated sportsbook in North America, and we believe this will give us a significant advantage over our competitors,” adds Johnson.

Throughout calendar 2021, the company made a number of acquisitions, including Helix eSports, ggCircuit and BetHard. The deals included Helix’s proprietary LANDuel platform, which was first launched in a pilot program with the New Jersey Department of Gaming Execution.

“When we launch LANdual at the beginning of the next calendar year, we will be able to provide a skills-based betting product in which fans of eSports teams, as well as every other 2.5 million players on our ggCircuit platform, will be able to play against each other for cash prizes,” Johnson told Yogonet in November.