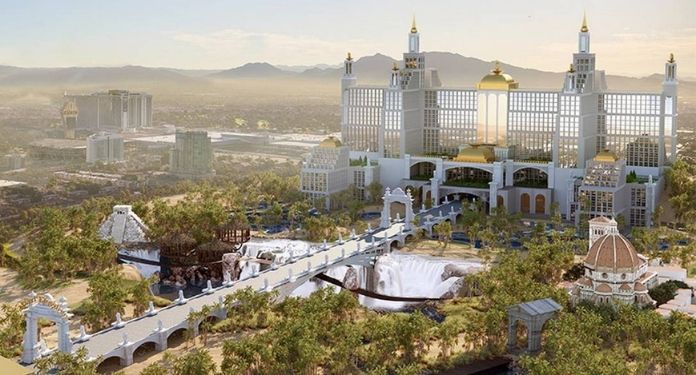 In the city of Las Vegas, Nevada, visitors can enjoy the pyramids of Egypt, the Eiffel Tower, the Canals of Venice, among other global tourist attractions, while walking down a street. But they could also come across a Bali-inspired palace or a replica of the Titanic.

According to O Globo, these were some of the resort projects that were publicly announced, but they never got off the ground. Like practically everything else in Las Vegas, these were grand projects, only they had bureaucratic or financial difficulties to execute.

Four of the casinos and hotels that would be built on the Strip, the most famous street in Las Vegas, ended up being redesigned by the Viva Lost Vegas project, an initiative of the online gambling site Betvictor. According to the projects originally announced, the betting site professionals revealed what the scenario of the North American city would be like.

Therefore, you can check the versions of ‘before’ and ‘after’ below, with photos that compare places today with images that reveal what these establishments would be like if the projects had gone ahead.

What would Las Vegas be like with these four projects?

In 1997, the city was preparing to contemplate the ‘grandest’ of its resorts. ITT Sheraton’s estimated $750 million project would revolutionize Las Vegas. The intention was to turn the traditional The Desert Inn, the fifth resort to set up shop on the Strip in 1950, into an idyllic realm.

In other words, a Balinese-inspired palace with around 3500 suites and nine restaurants, a system of canals for boat crossings and immense gardens. This water ride would also pass under the 12,5 mil meters² casino and would end in a lagoon, the stage for a nightly show of lights and water.

Throughout the 1990s, some issues impeded construction. The big problem was the purchase of the Sheraton group by Starwood. In a much larger company, the project was abandoned. Three years later, the Desert Inn was turned over to Steve Wynn, who ended up imploding the structure to build the current Wynn and Encore hotels.

The complex, which would be very close to the Luxury resorts and Mandalay Bay, would have replicas of numerous London attractions, such as the Parliament, Tower Bridge and Big Ben.

The site would have approximately two thousand suites and a casino with 8 thousand meters². And a Ferris wheel, similar to the London Eye. Over time, the initiative changed its creator and even its location on the Strip. Until now, the project was only on paper.

A Titanic-like resort could only be built in Las Vegas. The casino resort was budgeted at $1.2 billion and would house a theater, amusement park and zoos. The 1200 rooms would be spread throughout the main building, a smaller-scale reproduction of the ship. The place would also have a nightclub.

Bob Stupak, a well-known entrepreneur from Las Vegas, came up with the idea in 1999. Initially, the plan was for the development to be built next to the Sahara Las Vegas, on the north of the Strip, but it ended up being made impossible by the local authorities.

A new attempt was made to change the address and build ‘The Titanic’ at the intersection of Las Vegas Boulevard and Charleston Boulevard. However, the suggestion was rejected due to the residential style of the area.

Announced in 1975, Xanadu had a modern style yet unheard of on the Strip. The project, very similar to a futuristic pyramid, would have an elevated atrium, 1730 suites and several elements that are currently easily found in resorts, but which were considered innovations at the time, such as a garage.

The project included a convention center, tennis courts, gymnasium and a casino. The Xanadu would stand in what is now the medieval-themed Excalibur resort. However, construction was aborted in the 1970s, when it was realized that the Las Vegas sanitation system could not handle a project of that size.